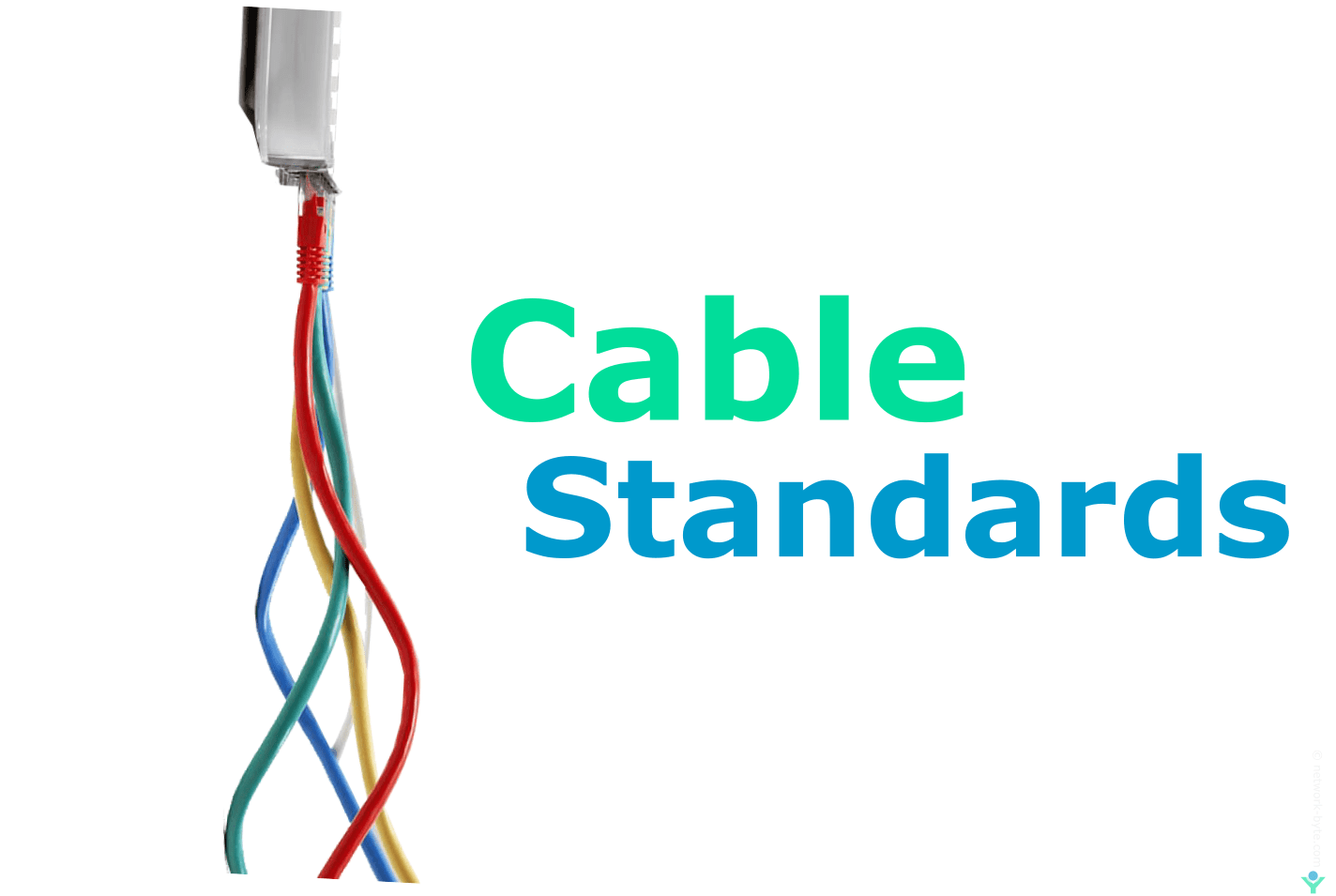 The cable is the medium through which information usually moves from one network device to another. There are several types of cable standard which are commonly used with LANs. In some cases, a network utilizes only one type of cable standard, other networks will use a verity of cable types. The type of cable chosen for a network is related to the network’s topology, protocol, and size. Understanding the characteristics of different types of cable and how they relate to other aspects of a network is necessary for the development of a successful network.

IEEE produces various standards for LANs known as IEEE 802.3 Standard, also known as the “Ethernet”, is the most widely used LAN technology in the world. This networking technology was originally developed by Xerox Corporation’s Palo Alto Research Center in 1972 and was then further refined by DEC, Intel, and Xerox. It was then called DIX(Digital Intel Xerox) Ethernet / Ethernet II.

A wide range of cabling type is been used to run Ethernet systems. Therefore, a different type of cabling standard is being used for the networks involved in connecting devices together using different types of the cabling system.

Thinnet coaxial cable is also known as 10base2 or thin Ethernet which refers to the specification for thin coaxial cable carrying Ethernet signals. The thinnet or 10Base2 Ethernet represents its data transmission rate of 10Mbps, the ‘Base’ refers to the baseband transmission and 2 refer to the approximate maximum segment length of 200 meters. It is a standard Ethernet cable mainly used in small networks, especially the liner bus network. Some of the characteristics of thinnet cable are:

Throughput: Thinnet can transmit data at a maximum rate of 10 Mbps, via Baseband Transmission

Connector: Thinet connects the wire to the network device with a BNC-T connector with only two open ends and is used to join two thinnet cable segments together.

Throughput: According to the Ethernet standards, thicknet transmits data at a maximum rate of 10Mbps.It can only be used for baseband transmission.

Cost: Thicknet is expensive than other types of coaxial cablings,such as thinnet.

Connector: Thicknet network can include a few different types of connectors, which are very different from those used on a modern network.

Both Thicknet and Thinnet coaxial cable rely on the bus topology. 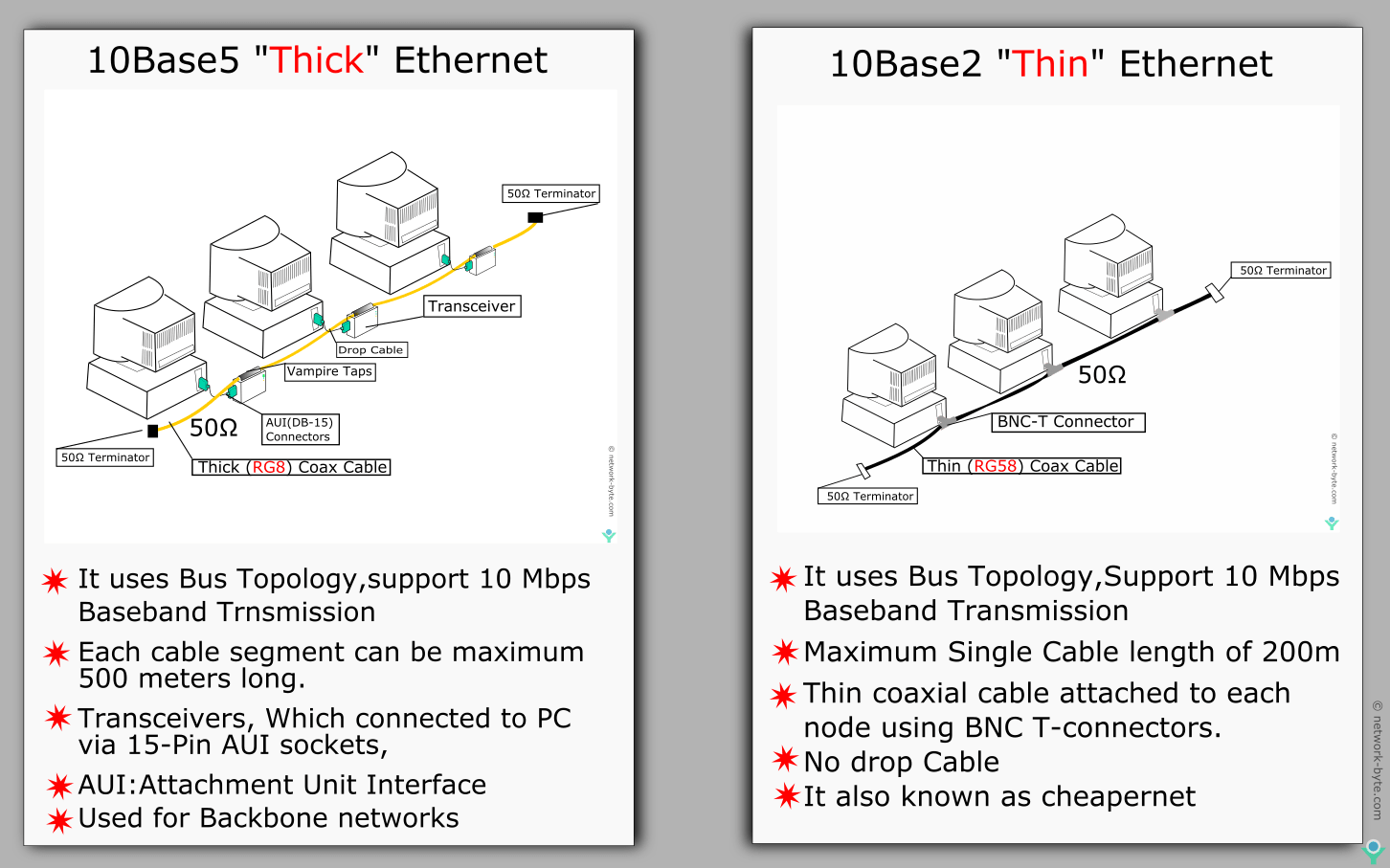 10-BASET cabling system is a popular Ethernet networking standard that uses an unshielded twisted pair(UTP)cable to connect the computer. The ‘10’ represent its maximum throughput of 10Mbps, the ‘Base’ indicates that it uses baseband transmission,(There are two types of transmission Baseband and Broadband), and ‘T’ stands for Twisted Pair, the medium it uses. It is an extremely popular LAN technology which is usually found on Ethernet star connected by UTP cables. They are usually connected to a central hub or a switch. This cabling system can carry 10Mbps with a maximum unrepeated distance of 100 meters using a baseband signal. A 10BASE-T LAN will serve approximately about 1,024 computer i.e. number of nodes 1024. 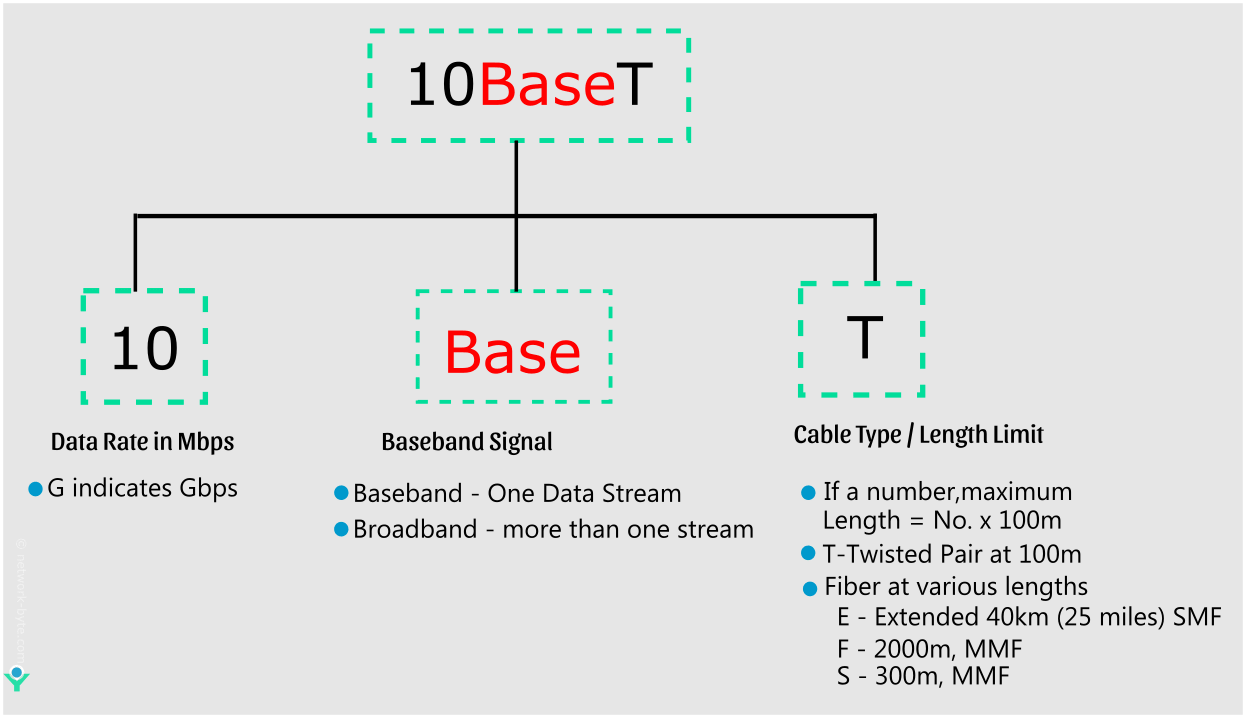 The LAN that can use the same infrastructure as the popular 10BaseT Technology is met by 100BaseT, also known as Fast Ethernet. The 100BaseT is specified by the 802.3standards Which enable

LANs to run at a 100Mbps data transfer rate.100BaseT uses baseband transmission and star topology as 10BaseT. The node on a 100BaseT network is configured in a star topology and the length between an end node and the hub cannot exceed 100 meters. Multiple hubs can be connected on buses to extend the network, but 100BaseT buses can basically support a maximum of three network segments connected with two hubs.

There are two 100BaseT specifications that differ primarily in the way they achieve the 100Mbps Transmission rate, which their cabling requirements.

100BaseTx is the variations of 100BaseT specified by the Institute of Electrical and Electronics Engineers(IEEE). It carries 100Mbps and used baseband signaling with a maximum distance of 100 meters per cable. It requires CAT 5 or higher unshielded twisted-pair cabling and uses the same two pairs of wire for transmission and receiving data that 10BaseT uses. Therefore, 100BaseTX is also capable of full-duplex transmission like 10BaseT. Full Duplexing can potentially double the bandwidth of a 100BaseT network to 200Mbps. It achieves its speed by sending the signal ten times faster and condensing the time between digital pulses as well as the time a station must wait and listen for the signal.

This variation of 100BaseT uses all four pairs of wires in a UTP cable and therefore, can use lower-cost CAT 3 wiring. It achieves its speed by breaking the 100Mbps data stream into three streams of 33Mbps each. These three streams are sent over three pairs of wire in the cable. However, because 100BaseT4 is less popular than 100BaseTx because it supports full duplexing.

10BaseFL Ethernet cable is made up of thin glass filaments. These thin glass filaments support in transmitting the light waves which carry very large amounts of data for very long distance. A fiber network is best for conditions where EMI/RFI interference is heavy. The Speed of the network is 10Mbps.The 10BaseFL network has a star Topology.62.5-micron duplex multimode fiber cable is recommended.

100baseFx is a fast Ethernet network that provides 100Mbps of speed. It uses Multimode Fiber-optic(MMF) cable for transmission. The Segment Length for a half-duplex connection is 412 meters and the full-duplex connection is 2000 meters. The 100BaseFx uses the star Topology for the network connection.

1000BaseSX is a fiber Gigabit Ethernet standard. It operates over multi-mode fiber using an 850-nanometer wavelength. This Wavelength in the light waves is near the infrared light. According to the specification given by the standards; the distance capability between the fiber endpoints of 220 m over 62.5/125 µm fiber. Although in practice, 1000BaseSX will usually work over a significantly longer distance.

1000Base-Lx is a fiber is a fiber optic gigabit Ethernet Standard, Which is in long wavelength laser.The signaling speed is around 1.25±100 ppm GBd, wavelength 1270 to 1355nm.Alng with RMS spectral width maximum is 4nm typically,GbE laser will be specified as having a 1300 or 1310nm wavelength.

100Base-Lx is specified to work over a distance of up to 2km over 9µm single-mode fiber.Practically it operates well for a much greater distance.Many manufacturers will guarantee operation up to 10 or 20 Km, only if their equipment is used at both ends of the link.1000Base-Lx can also run over multi-mode fiber with a maximum segment length of 550m.

The 10Gigabit Ethernet is used for media format. These media types are designed for short wavelength(850nm). The multimode fiber(MMF) is the material used for transmission. The design goal of these media types is from 2 meters to 300 meters of fiber distance.This depends on the type and quality of the multimode fiber. The longer distance is possible depending on the qualities of the fiber optic cable used. The 10GBase-SR media type is designed for use over dark fiber ,meaning a fiber cable that is not used and that is not connected to any other equipments.

The 10GBase-LR is used for media format. These media format types are designed for use over long-wavelength(1310 nm) single-mode fiber(SMF). The design goal of these media is from 2 meters to 10 kilometers(32,808 feet) of fiber distance. It also depends on cable type and quality.The 10GBase-LR is media type that can be used over dark fiber.

The 10GBase-ER is applied for media formats. These media types are designed for use over extra-long wavelength(1550 nm) single-mode fiber (SMF). The design goal of these media types is from 2 meters up to 40 kilometers(131,233 feet),depending on cable type and quality.The 10Gbase –LR is a media type that can be used over dark fiber.