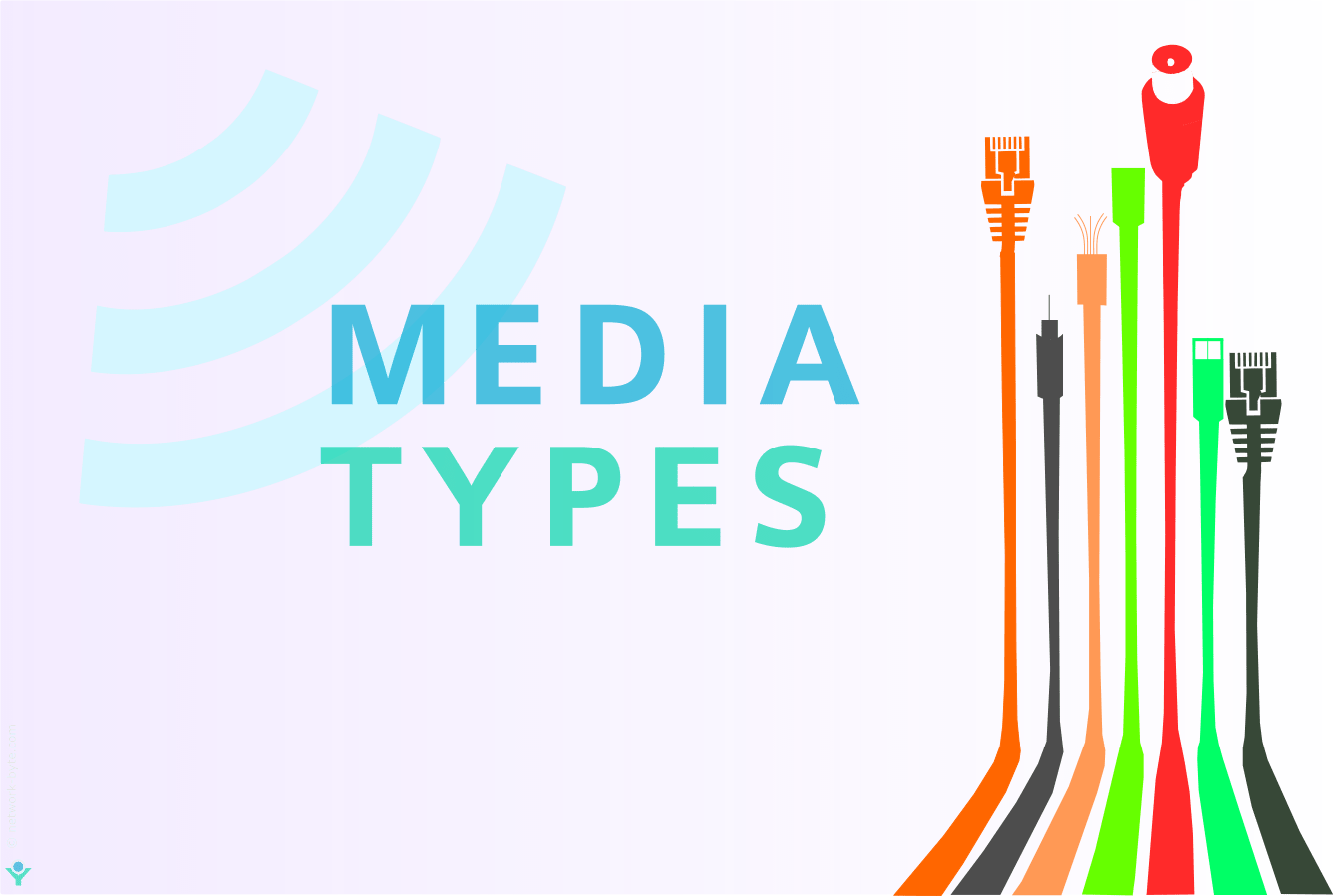 A cable is a device that contains a number of signal conductors usually in the form of separate wires. It is the medium through which information usually moves from one system to another through the network. There are several media types of cables,  which are commonly used with the Local Area network. In some cases, a network utilizes only one type of cable, Whereas other network uses a variety of cable types. The types of cable chosen for a network is related to the network’s topology, protocol, and size. Different types of cable are used in modern computer networks. The network connection for a system is important to transfer data from one system to another through the network medium via cable. The cable is relatively popular for a wide variety of communication systems like television, telephone, computer network. 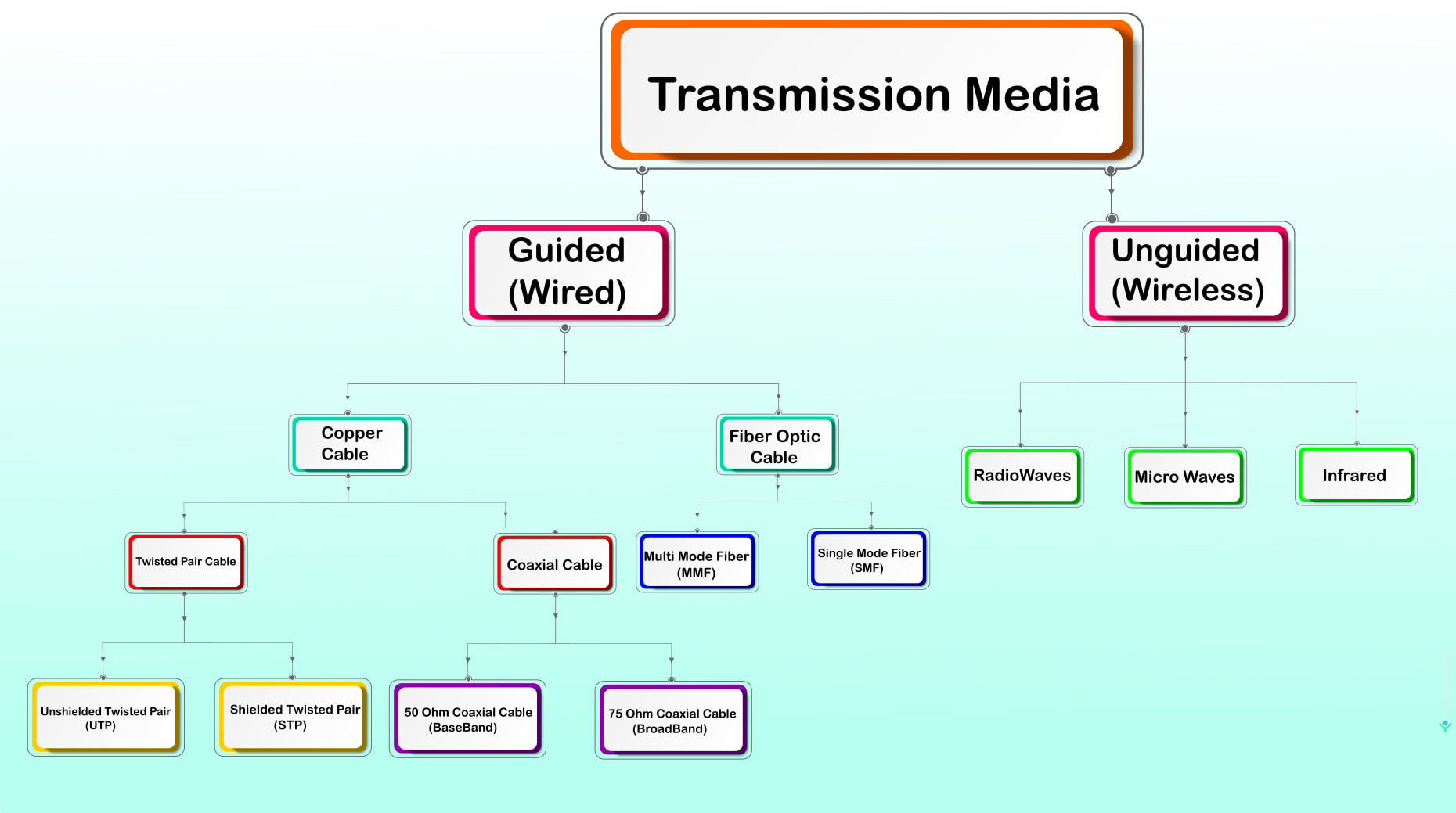 Guided transmission media means the data signals are guided along the path like a cabling system.

A coax cable or coaxial cable acts as a high-frequency transmission cable at low loss. It contains a single solid-copper core. Coaxial cable is used to pass radio frequency (RF) signals in the form of a transverse electromagnetic wave. it consists of an inner round copper conductor with layers of insulator and shielding to prevent electromagnetic interference. 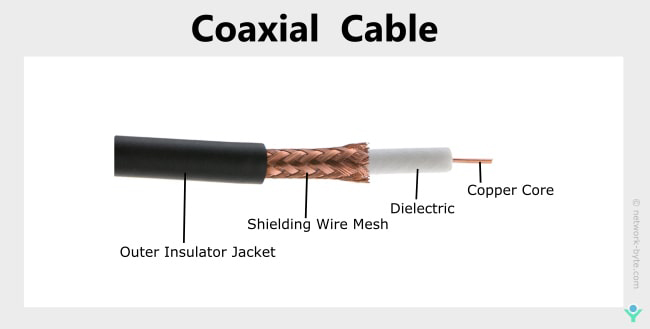 Coaxial Cable is made up of four Layer 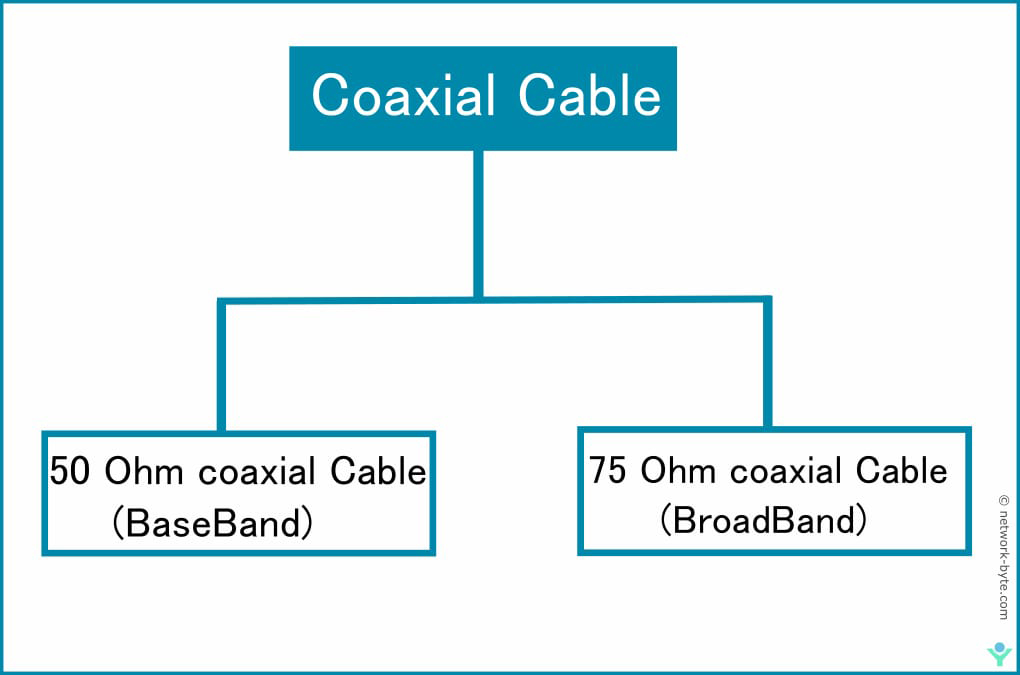 Coaxial cables use RG ratings to distinguish between the different kinds of cables.”RG” stands for “radio guide” and references the capacity of the cable. Dozens of Coaxial cables with various RG standard based on application and their manufacturing. 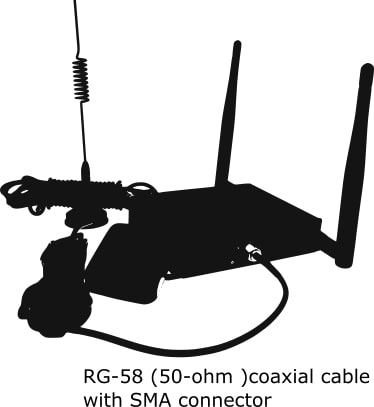 RG-58 is 50-ohm coaxial cable and is typically used for radio communications and thin Ethernet (10base2) networks. 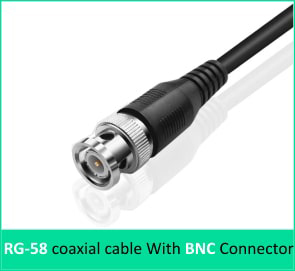 The amount of ohms measures electrical impedance along the coaxial cable.

RG8 cables are thicker compared to RG58. It is used in thick wire Ethernet(10Base5). data transfer speed, or bandwidth, of up 10 megabits per second and a maximum segment length of 500 meters (approximately 1,640 feet). All devices connect to a single cable, known as a segment or bus, and Thicknet supports up 100 devices per second. 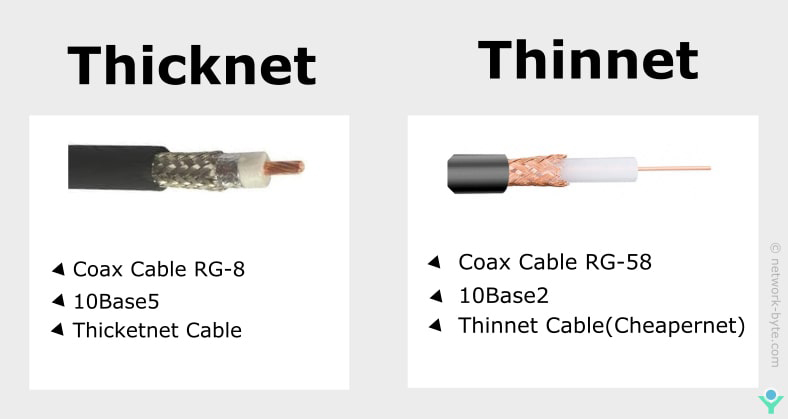 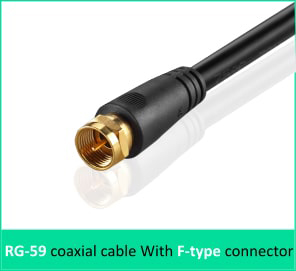 RG 59 Coaxial Cable is generally better for most CCTV systems and other analog video signals. RG 59 has a characteristic impedance of 75 ohms.

RG6 cable is a heavier gauge of conductor and has insulation and shielding tuned for high-bandwidth, high-frequency applications such as the Internet, Cable TV(CATV), and Satellite TV signals. An RG-6 coaxial cable has a characteristic impedance of 75 ohms. 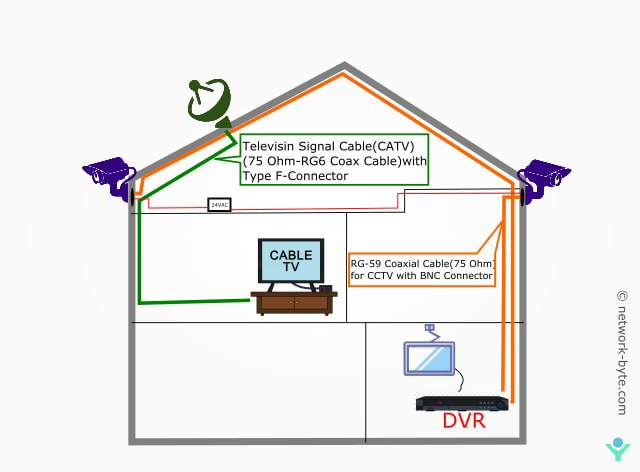 If your equipment has frequency ratings (above 50 MHz) Use RG 6 Coax Cable.If frequencies are lower than that, then use RG 59.

10Broad36– It is an obsolete computer network standard in the Ethernet family. The standard supports 10 Mbit/s Ethernet signals over standard 75-ohm cable television (CATV) cable over a 3600-meter range. Broadband provides advantages over the baseband signal that multiple signals can be carried on the same cable in Broadband. 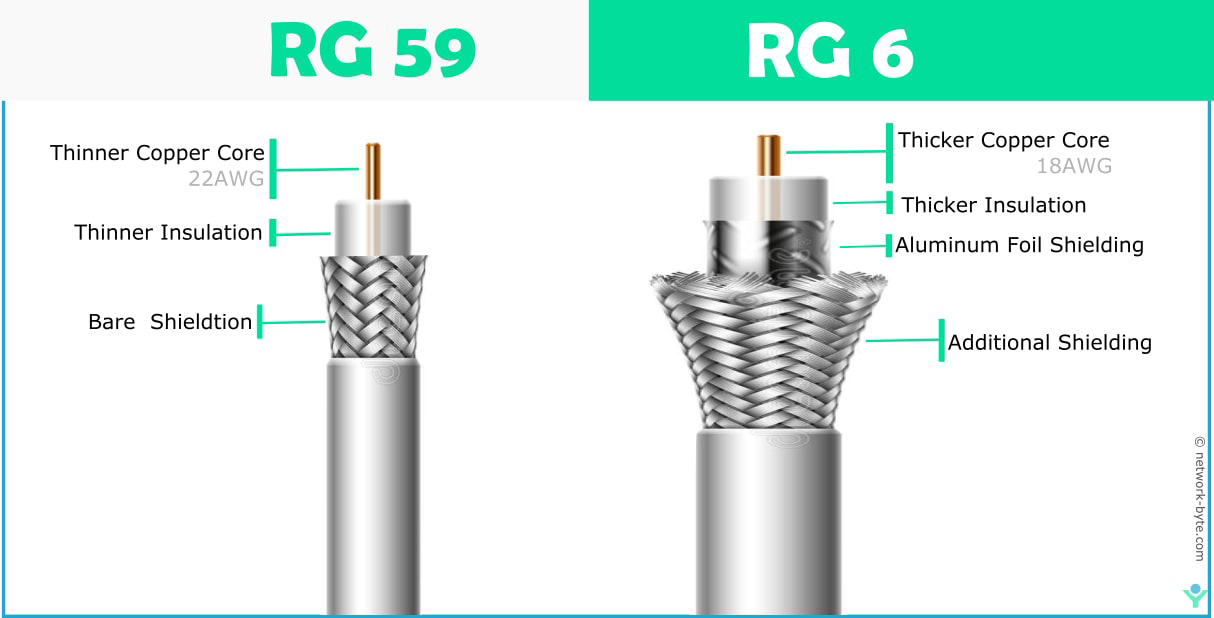 Twisted pair cable is the most common type of network medium used in LANs today. A transmission media consists of color-coded pairs of two shielded or unshielded insulated copper wires which are arranged in a spiral pattern. The spiral pattern is an important aspect of twisted-pair cables in order to minimize crosstalk or interference between adjoining wires. The advantage of using a twisted pair cable are:

Twisted pair are twisted together for the purposes of canceling out electromagnetic interference (EMI) from external sources and crosstalk between neighboring pairs.

The twisted pair cable is most often implemented in star topology. It can handle the faster networking transmission rates. The major disadvantage of twisted pair is because of its flexibility, it is more prone to physical damage. Therefore it is ideal in offices or work groups that are free of electromagnetic interference. There are two varieties of twisted pair cabling ,they are: 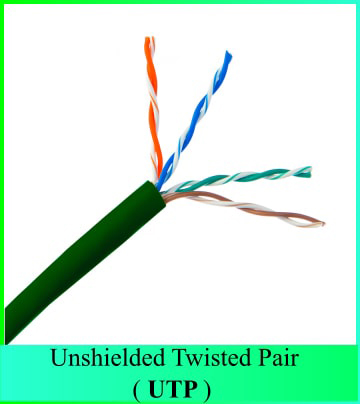 cabling consists of two unshielded wires twisted around each other that contain no shielding. It is commonly used in telephone wires and is common for computer networking because of the high flexibility of the cables. It is a plastic connector that looks like a large telephone-style connector. The standard connector for unshielded twisted pair cable is RJ-45 connector.

In order to manage the network cabling, you need to be familiar with the standards that may be used on modern networks. The categories of unshielded twisted pair cable are described below. 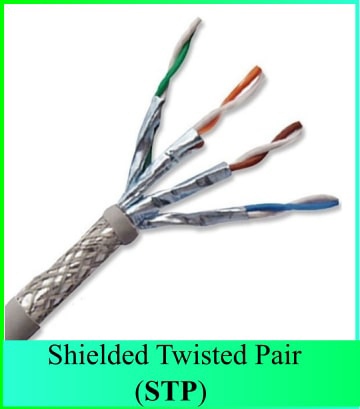 Shielded Twisted-Pair cabling is usually used in several network types. STP cable usually contains four pairs of twisted copper wires. It is different from UTP in the twisted pairs and is in a shield with electrically grounded woven copper mesh separating them from the cable’s outer sheath. This is done for the purpose of preventing interference via three techniques: shielding, cancellation, and wire twisting. It is suitable for environments with electrical interference. The essence of the shielding is to provide resistance to external Electromagnetic Interference(EMI) and to prevent crosstalk. STP is considered to be more secure than UTP, because of its shielding. It is however more expensive than UTP. 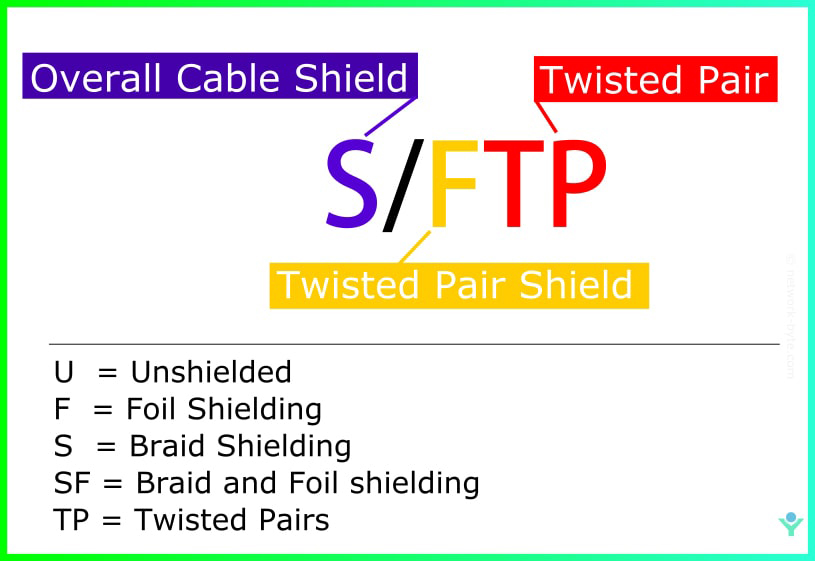 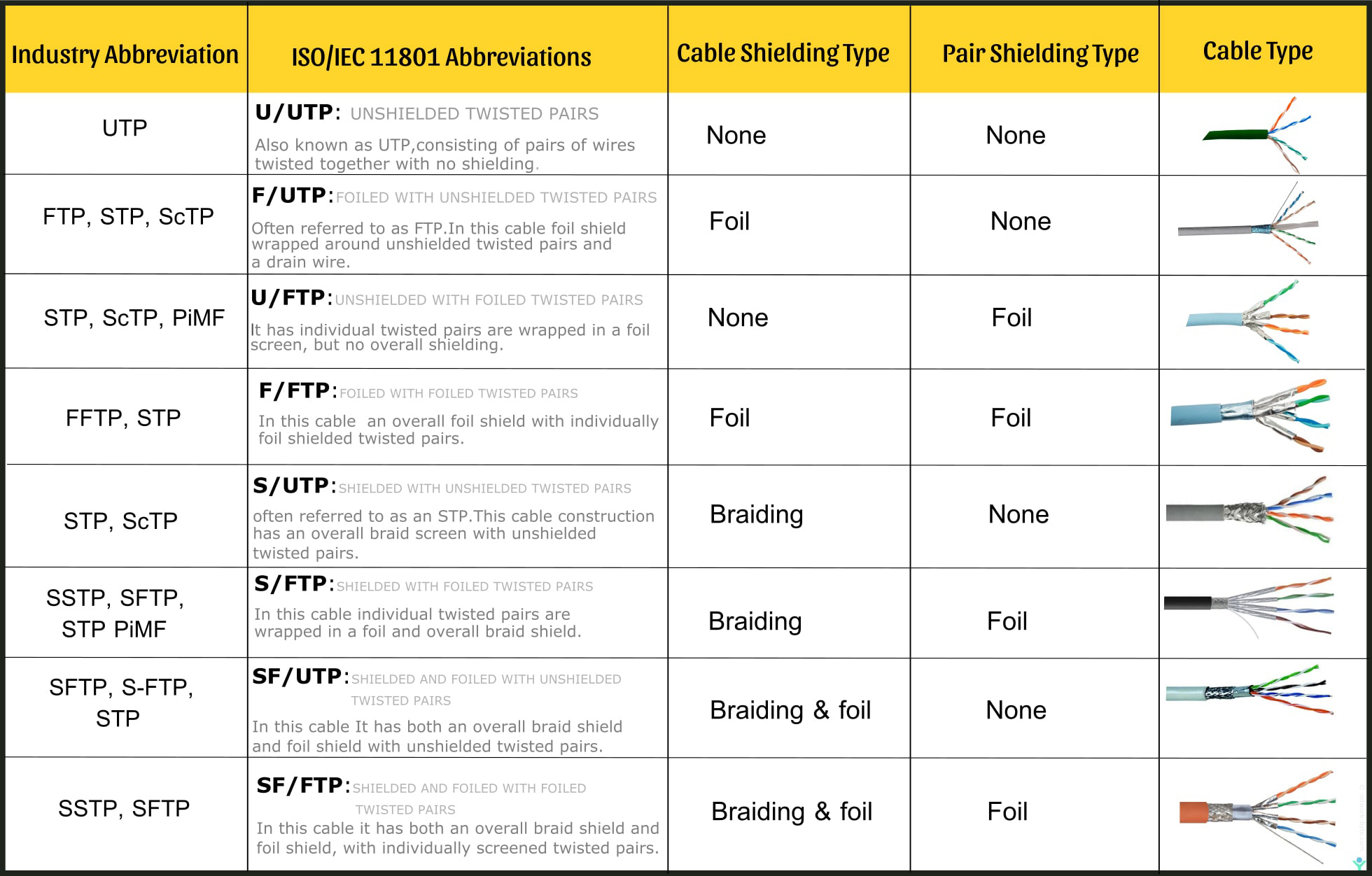 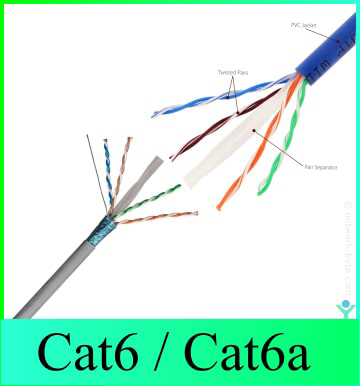 Category 7 and 7a are not recognized by the TIA/EIA 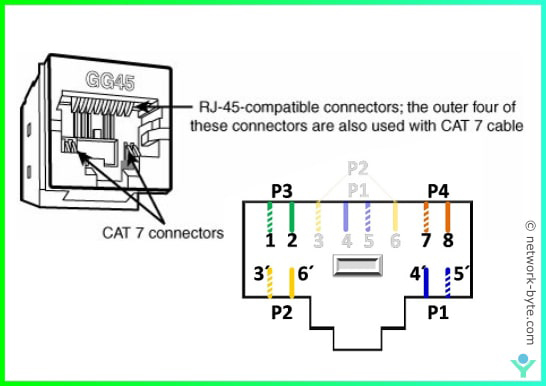 The GG45 connector has four additional conductors that provide support for frequencies of up to 600MHz, and up to 1000MHz using Cat7a.

Cat7 and cat7a cable may also be terminated using TERA connectors, which were developed by Siemon™. The TERA connector has a unique footprint and is not compatible with a standard 8p8c (RJ45) connector 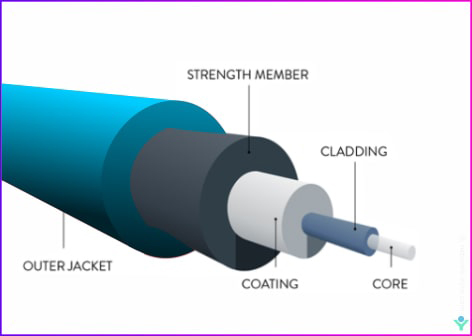 Fiber optic cable is composed of two layers of glass: The core, which carries the actual light signal, and the cladding, which is a layer of glass surrounding the core. The cladding has a lower refractive index than the core. This causes Total Internal Reflection within the core.

The fiber is coated with a protective plastic covering called the “primary buffer coating” that protects it from moisture and other damage.

TOTAL INTERNAL REFLECTION states that when the angle of incidence exceeds a critical value, light cannot get out of the glass; instead, the light bounces back in.

Optical Transmission that electromagnetic radiation, typically infrared light, along a silica or glass-based medium by the process of reflection and refraction.

Why use optic fiber cable?

Based on the Light travel through one Path(that is mono mode or single mode fiber) or more than one path(that is called multi mode fiber) along with core diameter fiber optic cable are divided into two major categories. 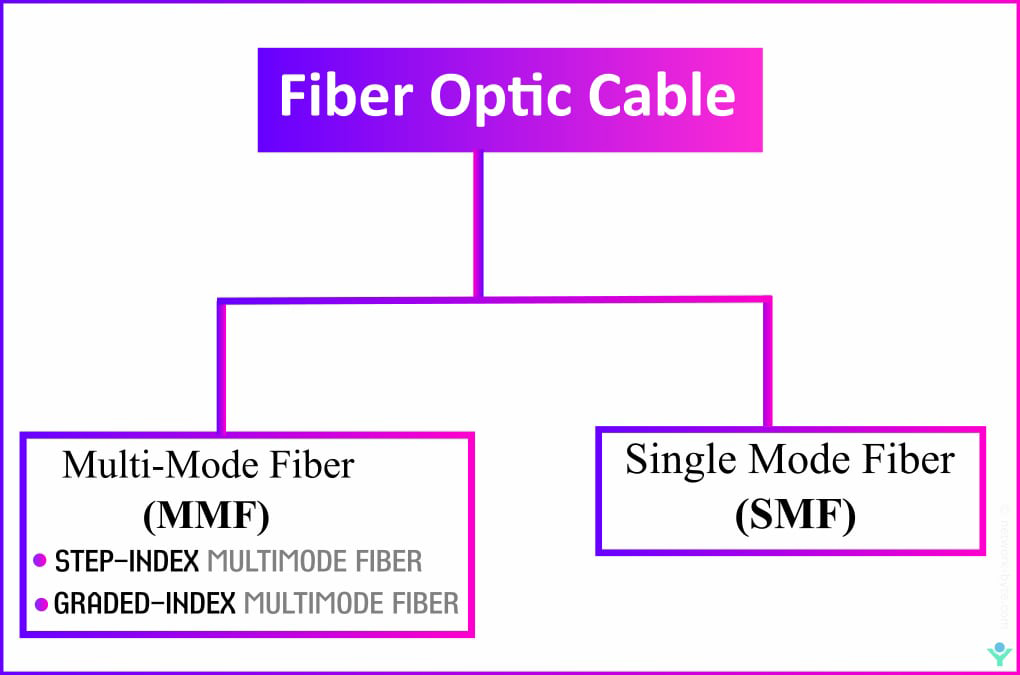 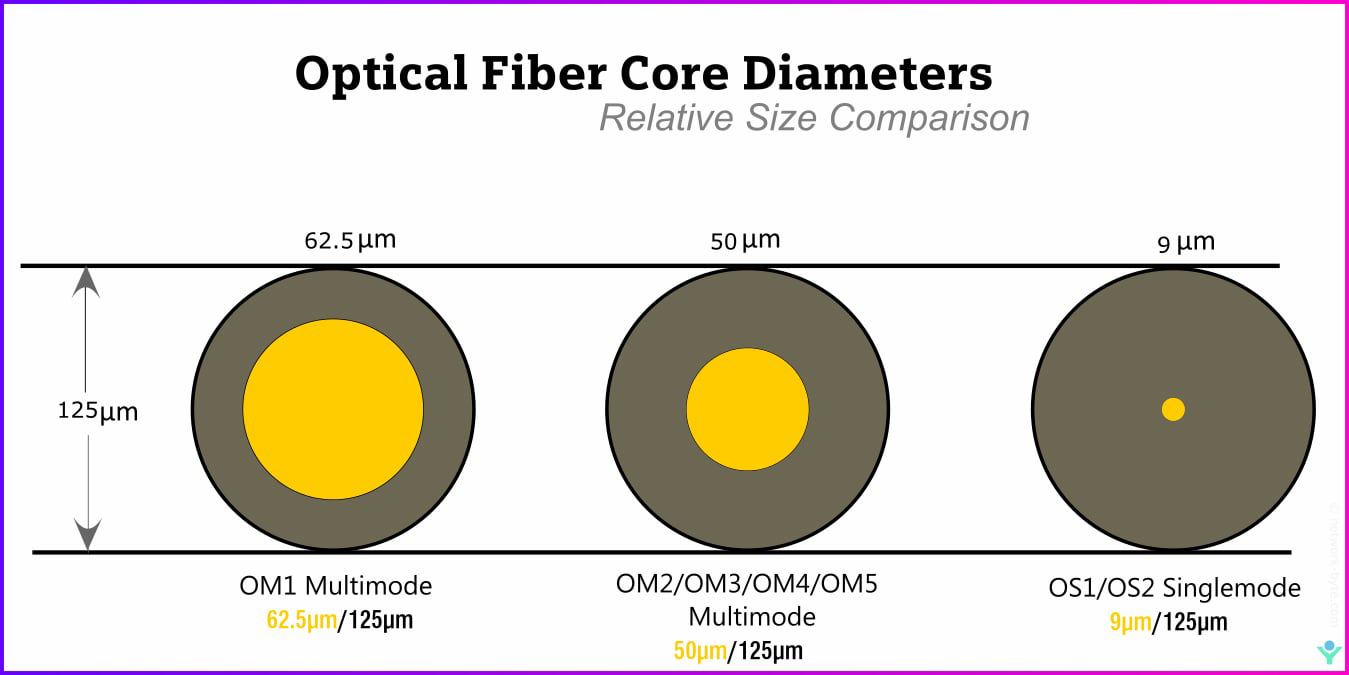 Multimode fiber optic cables can handle high bandwidth and faster transmissions but only over short distances.

Transceiver-(Transmitter+Reciver) Electronic device that both transmits and receives analog or digital signals.

The transition between the core and cladding can be sharp, which is called a step-index profile, or the refractive index of the core is uniform throughout and undergoes an abrupt change at the core-cladding boundary.

Step-index multimode fibers are mostly used for imaging and illumination.

The refractive index is maximum at the center of the core then it decreases towards the core-cladding interface.

Multimode fiber cable is prefixed with ‘OM’ –Optical Multimode. In this cabling standards deal with cable and connecting hardware. 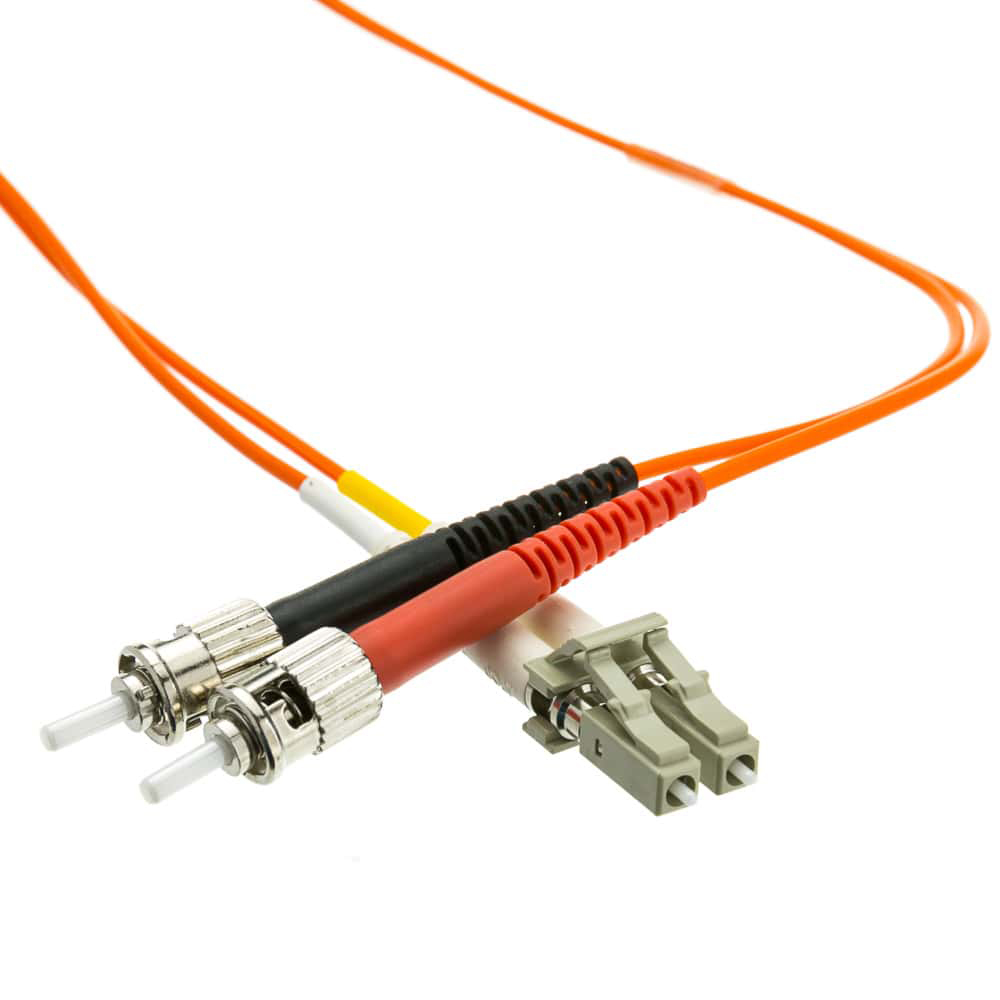 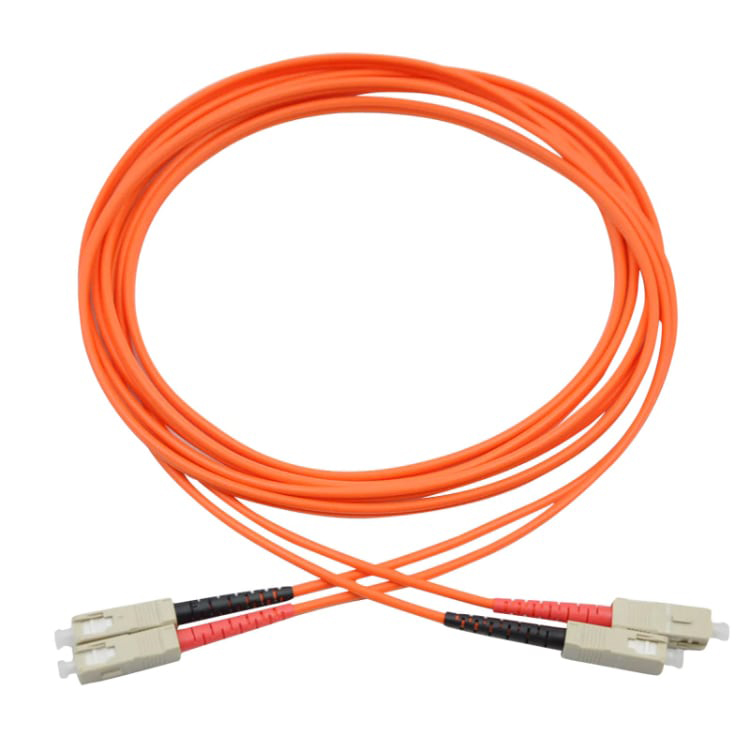 Technical naming conventions  In ISO/IEC 11801 and EIA/TIA standards and specifications for Singlemode Fiber.

The main difference between single mode OS1 and OS2 is cable construction rather than optical specifications. 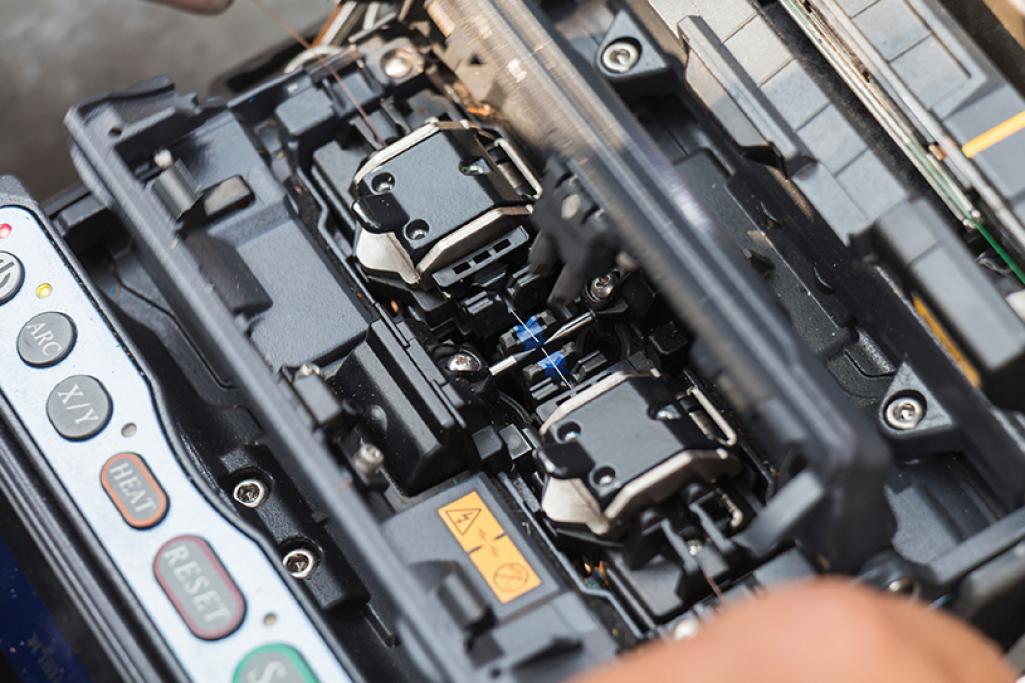 -The purpose of a fusion splice joints is to literally weld prepared fiber ends together, thereby creating a permanent(non-demountable) joint featuring the minimum possible optical attenuation(and no reflection). 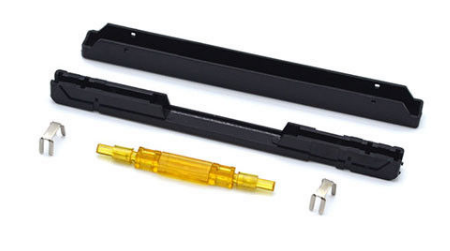 is an alternative to fusion splicing and uses a simple but high-quality alignment mechanism which enables the positioning and subsequent fixing of the two fiber ends by use of crimps or glue.

While selecting fiber optic cable consider the jacket type is very important it provide environmental protection .Many different materials are available for cable jacketing  some of the more popular jacketing materials used for optical cables.

The National Electrical Code (NEC) specified fire resistance for both non-conductive and conductive cables based on the use in plenum ,riser, and general Purpose areas. 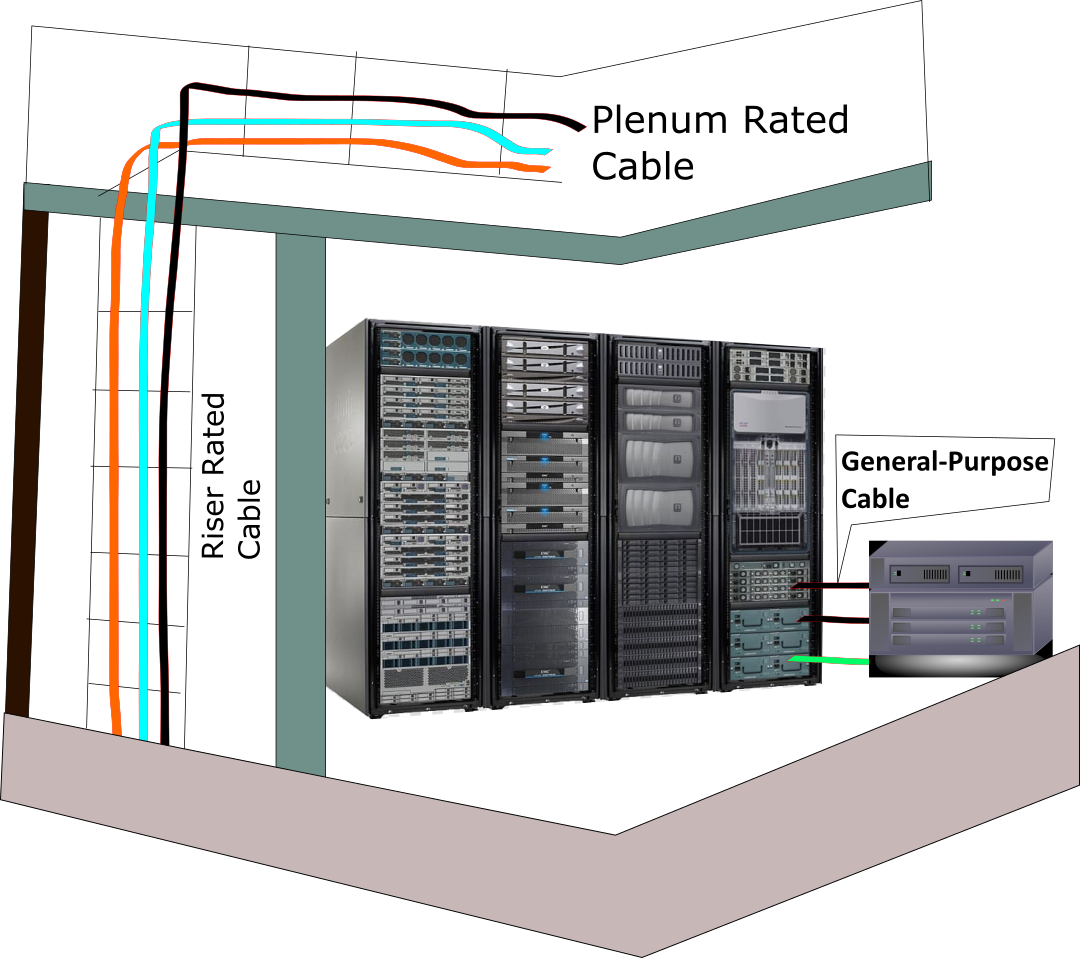 Plenum area-It is Space in building where ventilation or air distribution system in drop Ceiling and raised floors.

Riser area – It is area between floor where shaft or duct that runs vertically through floor.

Unguided Transmission is also known as Unbounded Transmission where Data signal are not bonded to cable media. In Unguided media signal are transmitted as electromagnetic signal through air. This transmission uses different kinds of waves like radiowaves, microwaves, infrared waves.

Unguided signals can travel from the source to the destination in several ways: Gound propagation, Sky propagation and Line-of-sight propagation

Radio waves are EM(Electromagnetic)Waves that have wavelength between 1 millimetre to 100 kilometres(300 Ghz to 3Khz) in frequency. 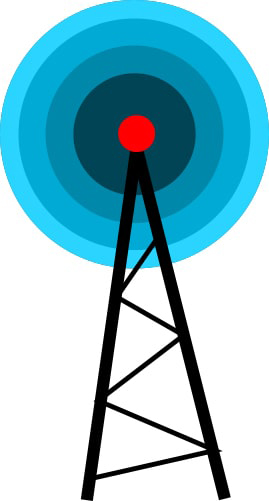 Radio waves are omni directional means they travel in all the direction from the source. When an antenna transmits radio waves, they are propagated in all direction. A sending antenna send waves that can be received by any receiving antenna. It issued Mobile, AM/FM radio,television.

It is a line of sight transmission i.e. the sending and receiving antennas need to be properly aligned with each other. Microwaves are a type of radio waves with high frequencies. The frequency of microwaves lies in the 300Mhz to 300Ghz.

Microwaves are widely used for point-to-point communication because their small wavelength, Which means that the signal is focused into a narrow beam. Additionally, each antenna must be within line of sight of the next antenna. 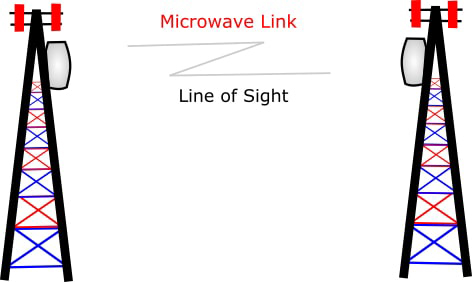 Microwaves have higher frequencies and don’t penetrate wall like obstacles.

Microwaves, due to their unidirectional properties, are very useful when unicast(one-to-one) communication is needed between the sender and the receiver. They are used in cellular phones, satellite networks and wireless LANs.

Infrared signal have frequencies between 300GHz to 400THz.They are used for short-range communication.

Infrared waves having high frequencies prevents interference between one system to another. In addition, we cannot use infrared waves outside a building because the sun’s rays contain infrared waves that can interfere with the communication.