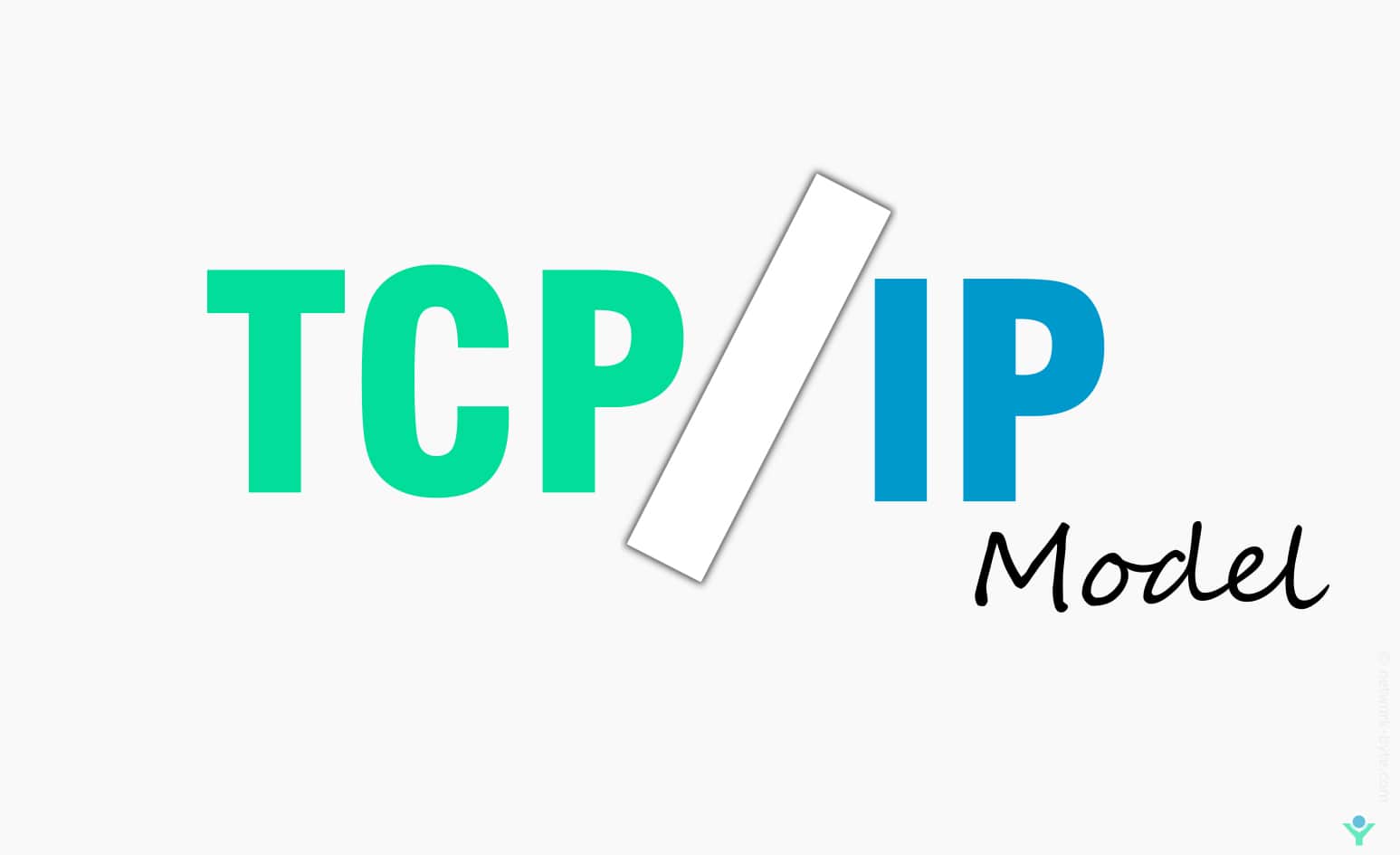 TCP/IP network model is named after two main protocols(TCP- Transmission Control Protocol and IP-Internet Protocol) and is widely used in current internet architecture. The TCP/IP reference model is a layered model developed by the Defense Project Research Agency(ARPA or DARPA) of the United States as a part of their research project in 1960.

The main purpose of this model is to connect two remote machines for the exchange of information. These machines can be operating in different networks or have different architecture.

In the early days, the TCP/IP model was developed it has four layers While the updated TCP/IP model has five layers. 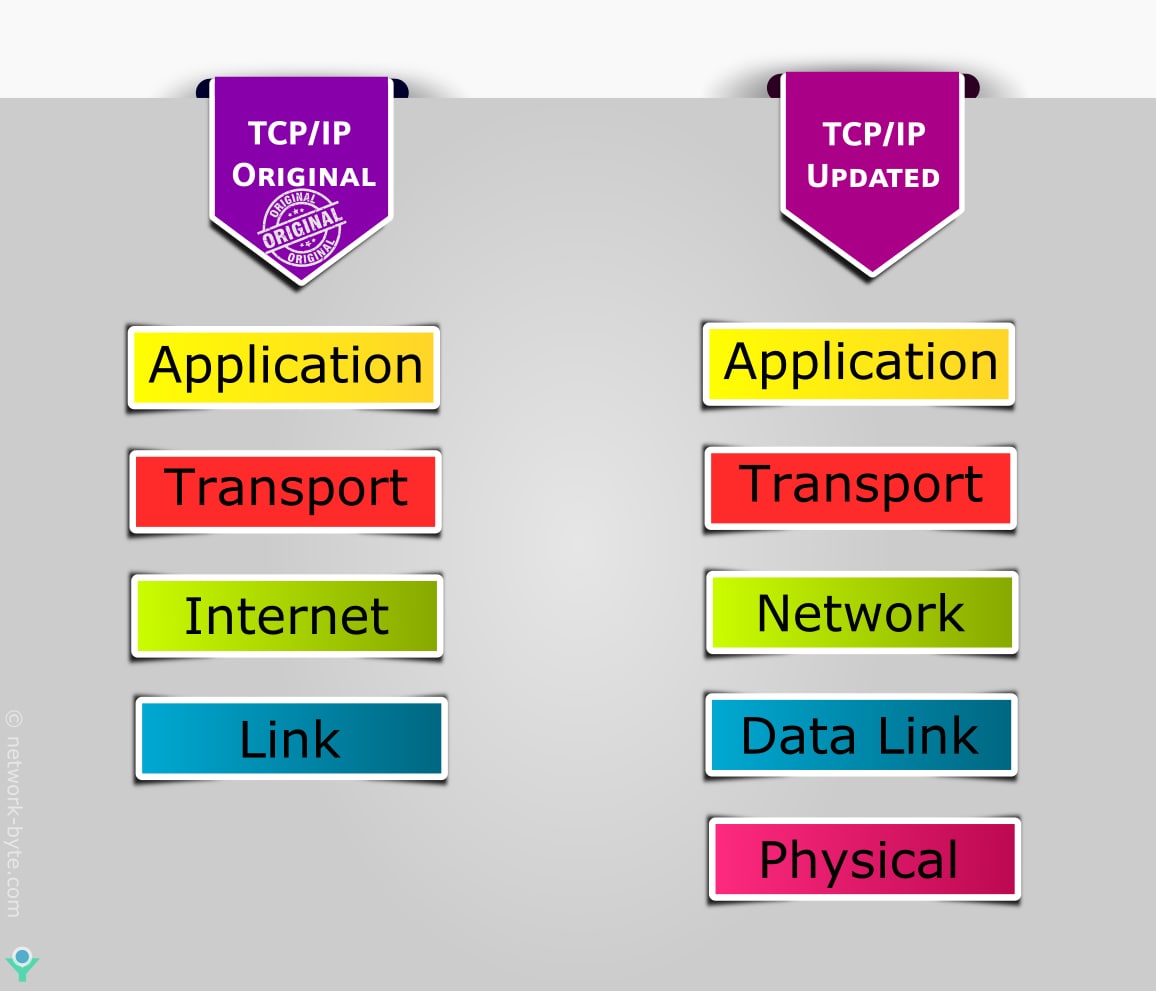 In the original version of the TCP/IP Bottom layer (Link Layer) used for data transmission by defining the functionality and components. The updated version split the link-layer into two-layer- Data Link Layer and Physical Layer.

and the functionality which is indirectly related to physical transmission is specified in the Data Link Layer.

In the updated version, the name of the Internet Layer is changed to the Network Layer.

nowadays, we generally use a five-layer TCP/IP model, 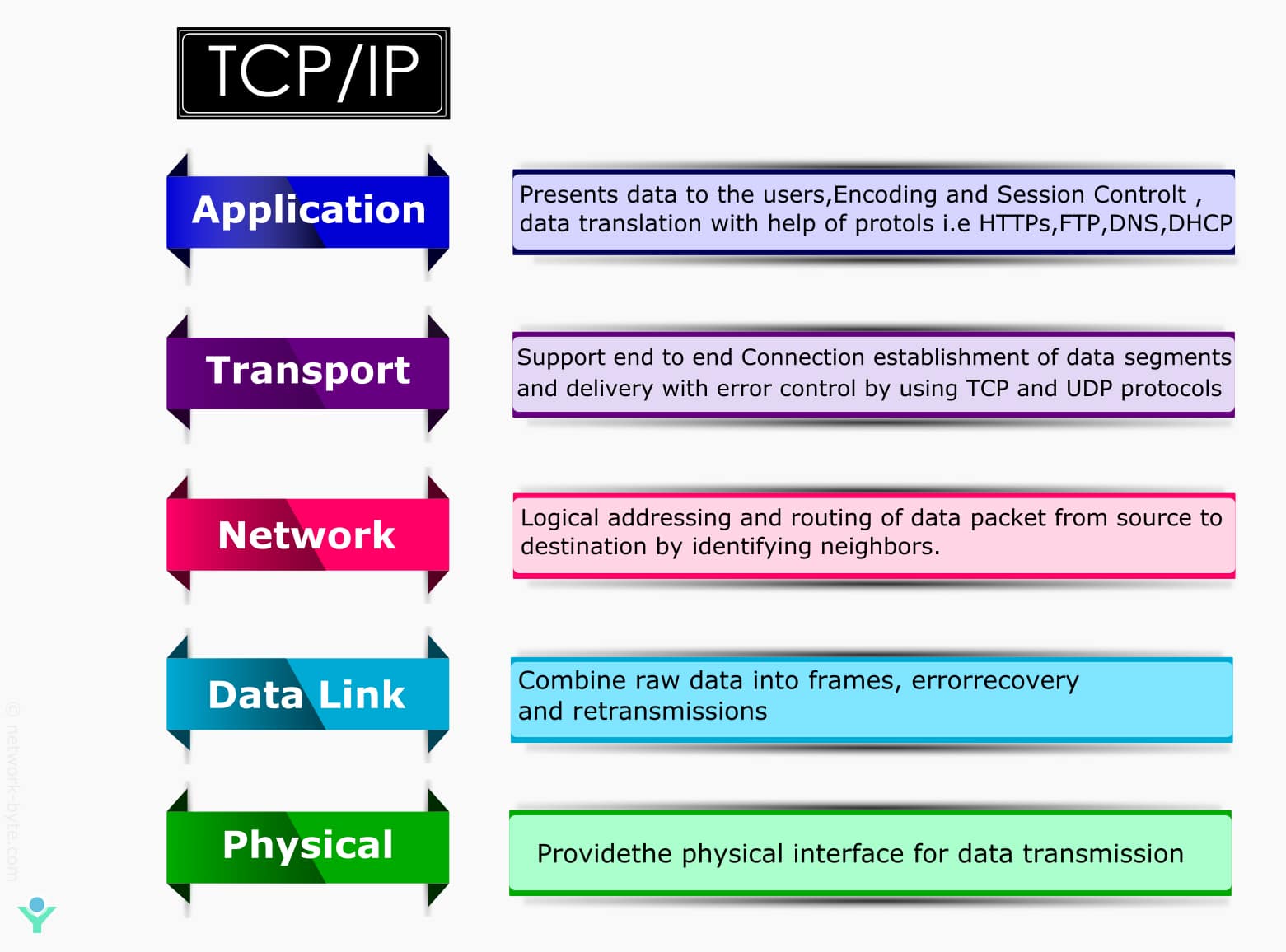 TCP/IP consists of two main protocol-TCP (Transmission Control Protocol) define how an application can establish a channel of communication across the network.

IP(Internet Protocol) is responsible for addressing and routing of the packet for its successful delivery to the destination.

The bottom layer focuses on how to transmit bits over each individual link. The data-link layer focuses on sending data over one type of physical link: for instance, networks use different data-link protocols for Ethernet LANs versus wireless LANs. The network layer focuses on delivering data over the entire path from the original sending computer to the final destination computer. And the top two layers focus more on the applications that need to send and receive data.

An interface between software running on a computer and the network itself. The most common protocols that work in this layer are HTTP,HTTPS,FTP,SNMP,NTP,SSH,TELNET,DNS and DHCP

HTTP:HyperText Transfer Protocol. It defines a set of rules for transferring files like text, graphic images, sound, video, and other multimedia on the World Wide Web. It used to provide a way to publish and retrieve HTML pages.HTTP is also called a ‘stateless protocol’ because each command is executed independently.HTTP protocol connects to TCP port 80 and is a request/response protocol between clients and servers.

HTTPS: HyperText Transfer Protocol over Secure Socket Layer. It is a combination of normal HTTP interaction over an encrypted Secure Socket Layer forms the HTTPS. It incorporates encryption into Web browsing.SSL, The encryption protocol, provides a 40-bit encryption key using an RC4 encryption algorithm by default. The Uniform Resource Locator used by https:// indicates that http:// is used but with different default TCP port 443.

FTP: File Transfer Protocol is the protocol where files can be exchanged over a network. It uses TCP services to transfer files from one host to another. In Server and client, the architecture FTP server will listen for connection requests which are initiated by FTP client. Port 20 and 21 are used to run FTP. Port 21 is used by the FTP server to listen for incoming connection requests from FTP clients. Port 20 used for data transfer.

NTP: Network Time Protocol is the protocol meant to synchronize the clock of the computer systems over data networks.NTP is implemented with the support of algorithms and clocks. This protocol operates at the Application Layer and it uses UDP port 123 for its transport layer services.

SSH: Secure Shell(SSH) is a protocol used for creating a secure connection between two systems. In this protocol, the client machine initiates a connection with a server machine. Port 22 is used for SSH.

TELNET: the name Telnet is derived from the term telephone network. It is a command-line client /server program that provides remote control capabilities for computers on a network. Telnet based on TCP port 23. Telnet sessions are unencrypted and therefore insecure.

DNS: Domin Name System refers to the hierarchical way of translating domain names(www.network-byte.com) to IP (156.67.222.208) address.There is an organized system of computers and databases that allow the resolution of domain names to IP addresses possible. DNS uses the User Datagram Protocol (UDP) on port 53 to serve DNS queries. If a DNS response is larger than 512 bytes, Transmission Control Protocol (TCP) is used instead of UDP, to enable data integrity checks.

DHCP: Dynamic Host Configuration Protocol.it automatically assigns an IP address and other information to each host on the network by using a DHCP server.

TCP/IP transport layer defines how data should be delivered – reliable or unreliable, Datagram or segmented. It controls the reliability of communication through segmentation, flow control, and error control. The two most commonly used transport layer protocols are the Transmission Control Protocol (TCP) and the User Datagram Protocol (UDP).

Segmentation:- it is the process of dividing received data into small units

flow control:– it is the process of controlling the amount of data being transmitted.

UDP(User Datagram Protocol): it is a connectionless protocol it doesn’t provide acknowledgment of the sent packets. Therefore, it isn’t reliable.UDP continuously sends datagrams to the recipient whether they receive them or not.

TCP (Transmission Control Protocol ) It is a connection-oriented protocol. it establishes a connection between a sender and receiver before data can be sent. It is reliable. Data sent using a TCP protocol is guaranteed to be delivered to the receiver. If data is lost in transit it will recover the data and resend it. TCP will also check packets for errors and track packets so that data is not lost or corrupted.

In the original TCP/IP model, this layer termed as an Internet Layer. In the updated version, it is renamed as Network Layer. Task performed by this layer is assigning the Logical address for source to destination i.e End-to-End delivery and routing. For this action, it uses the IP protocol.

The TCP/IP network layer includes a small number of protocols, but only one major protocol: the Internet Protocol (IP). In fact, the name TCP/IP is simply the names of the two most common protocols (TCP and IP) separated by a /.IP provides several features, most importantly, addressing and routing.

The TCP/IP network layer, using the IP protocol, provides a service of forwarding IP packets from one device to another. Any device with an IP address can connect to the TCP/IP network and send packets.

Routing is a method of moving data packets from source to destination. It uses to connects different computer networks by routing packets from one network to the other.It is performed by a network device known as a router. The algorithm running on the router finds the best and shortest path for the delivery of the data packet.

The TCP/IP model’s data-link define the protocols and hardware required to deliver data across some physical Medium. In this layer Physical addressing, i.e MAC Address of source and destination are assigned. The data unit in this layer is known as a frame. It encapsulation data received from the network layer. This layer structure of the frame is specified here along with the channel access protocol which would be used for transmitting the frame over the link.

The two work together quite closely; in fact, some standards define both the data-link and physical layer functions.

The physical layer defines the cabling and energy (for example, electrical signals) that flow over the cables. it converts binary data into signals and transmits over the local media. Some rules and conventions exist when sending data over the cable; however, those rules exist in the data-link layer of the TCP/IP model. 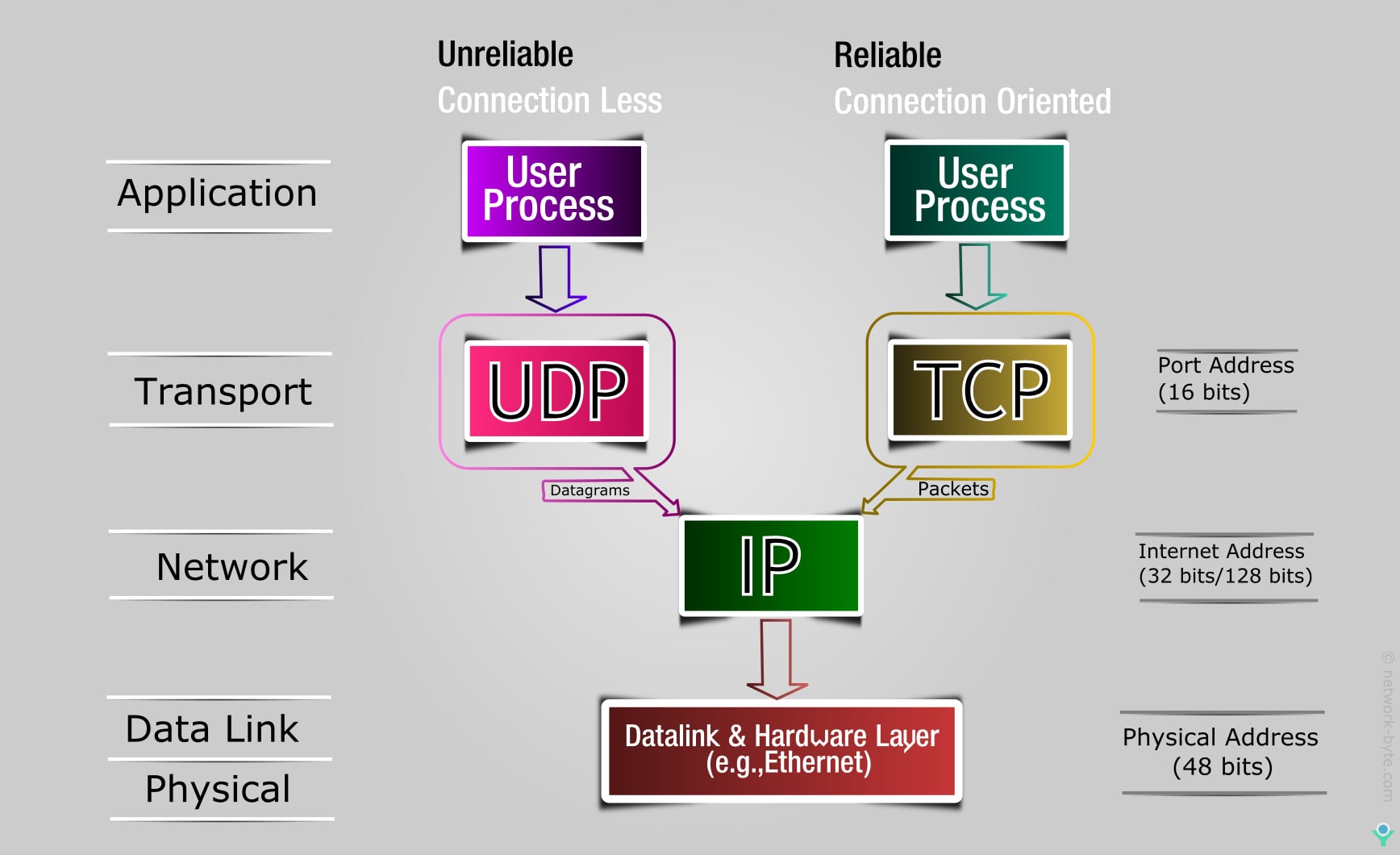 TCP/IP data-link layer provides services to the layer above it in the model (the network layer). When a host’s or router’s IP process chooses to send an IP packet to another router or host, that host or router then uses link-layer details to send that packet to the next host/router.

The OSI model has many similarities to the TCP/IP model from a basic conceptual perspective. It has layers, and each layer defines a set of typical networking functions. As with TCP/IP, the OSI layers each refer to multiple protocols and standards that implement the functions specified by each layer.

Today, the OSI model can be used as a standard of comparison to other networking models. The below Figure compares the seven-layer OSI model with both the four-layer and five-layer TCP/IP models. 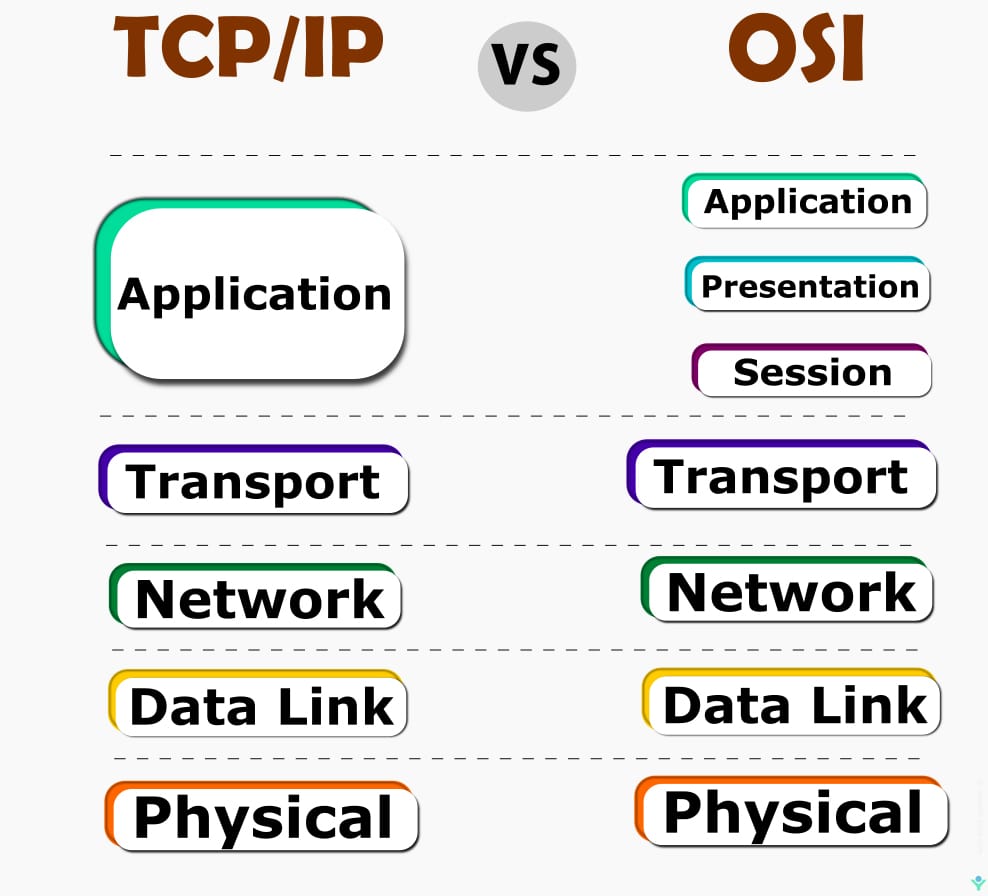 TCP / IP and OSI models are commonly used for communication networks. There are some similarities and differences between them.OSI model is a reference model That is developed by ISO Whereas TCP/IP model used in almost today’s network for connection establishment. OSI model supports a vertical approach while Horizontal approach is followed by TCP / IP.

Play Quiz on TCP/IP Model and many More