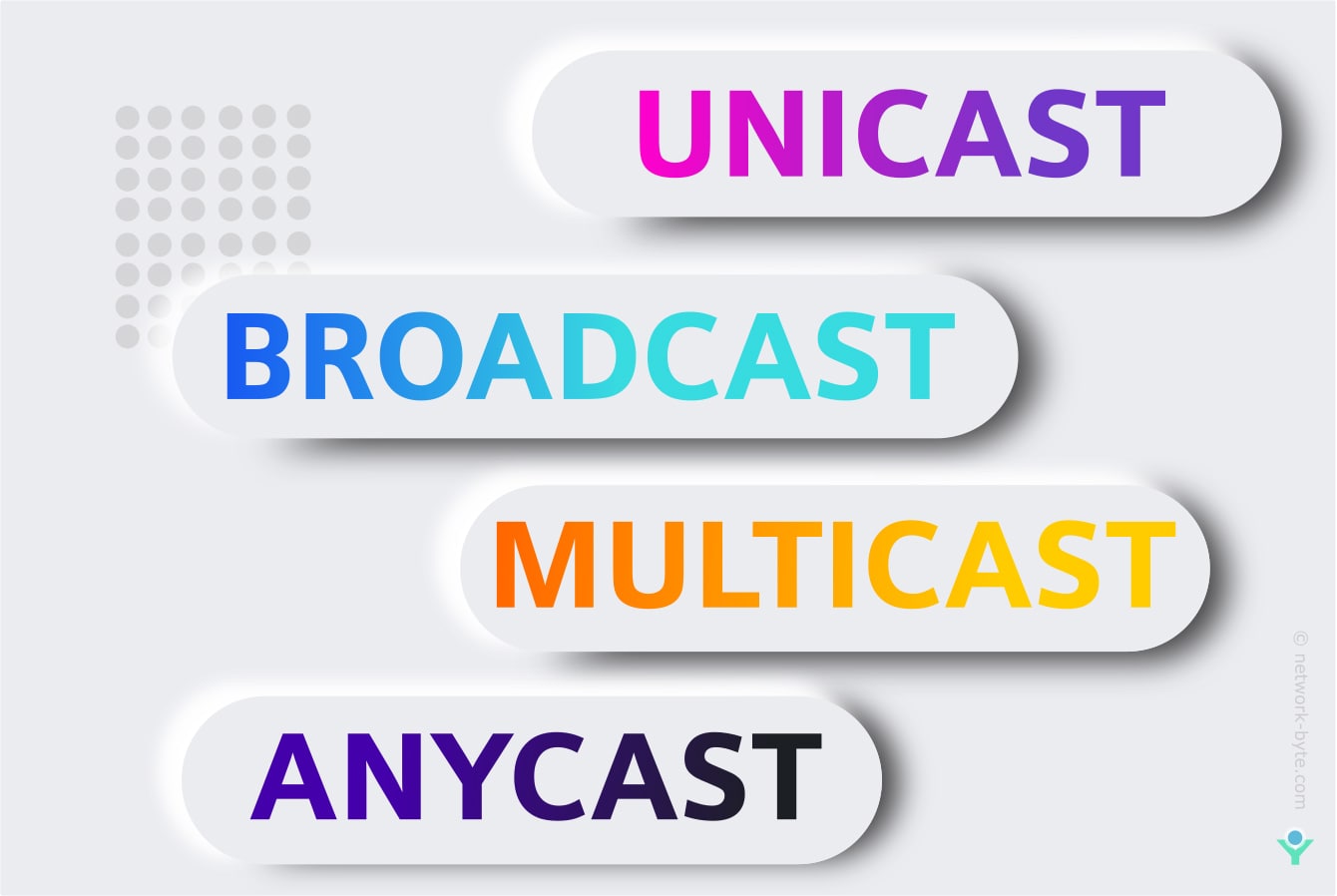 In a network technology, the messages are sent using a number of tasks which is undertaken in order to successfully transmit the data from one place to another. One of the methods is simply the addressing of the message that is putting an address on it so that the system transmits it to the right place. The other it transmitting the message, which is sending it to the intended recipient.

Here the suffixes “Cast” signifies stream of packets transmitted over the network.

The prefix “Uni” means single where data is sent from one sender to one receiver. It is also known as one-to-one transmission.

Here in the above figure Host, A having IP address 10.0.0.55 want to send data to Host B having IP address 85.0.1.6 then this connection established is known as Unicast. This is the most common form of data transfer over the networks.

In unicast both sender and receiver have a unique  IP address. In IPv6 unicast has various flavor as discussed below

Link-local: Used only to communicate with devices on the same local subnet link. Routers do not forward packets with these addresses. Address range from fe80 to febf.

In Broadcast where data sent from one computer to all the device. It is one-to-all transfer. There are two type of broadcasting Limited Broadcasting and Direct Broadcasting. It is  Ipv4 specific. In IPv4,a host needs broadcast communication when it does not know the receiver’s address.

At layer 2 i.e Data Link Layer  broadcast frame  has the value of FFFF.FFFF.FFFF (all binary ones) in destination field. The switch will flood broadcast frames out all ports except the port that it was received on.

Limited Broadcasting-When data send from one host to all hosts in the same network. consider above figure where host A having IP address 18.0.0.8 want to send data to all host in its 18.0.0.0 network. In the data packet, the source address would be 18.0.0.8 and in the destination address all 1’s in 32 bit that gives 255.255.255.255 in dotted decimal notation. in that way limited broadcasting performs.

Direct Broadcasting-when data is transfer to all the hosts in other networks. Consider the above figure where host A having IP address 18.0.0.8 want to send data to all host in another network that is 65.0.0.0 in this case in destination address host bit’s will be all 1’s. Here in our case host is of 24 bit so all 24 bit is replaced by 1’s that become 65.255.255.255 in dotted decimal notation .in that way Directed Broadcast perform.

Multicast is a one-to-many type of communication. one/more senders and one/more recipients participate in data transfer. The host which is a member of the multicast group can accept data. We send a message from one source to a group of receivers we use multicast.

Multicast can’t be implemented on the internet. Video Stream companies like Netflix, Youtube uses lots of unicast address. Multicast on the internet used by Local ISP, They use multicast for IPTV to deliver video to their own customers. We also required  application that support multicast like VLC media player.

IGMP snooping to help the switch figure out where to forward multicast traffic of the connected port.

In between router to forward multicast traffic accomplish by

The most popular multicast routing protocol is PIM

Anycast address in IPv6 is an address that is assigned to more than one interface. Typically, the address belongs to different nodes/devices. A packet that is sent to an anycast address is routed to the nearest interface that has that address.

There is no special prefix for an IPv6 anycast address.

The determination of the “nearest” router is calculated on the basis of the number of hops, distance, efficiency, Latency, and cost. 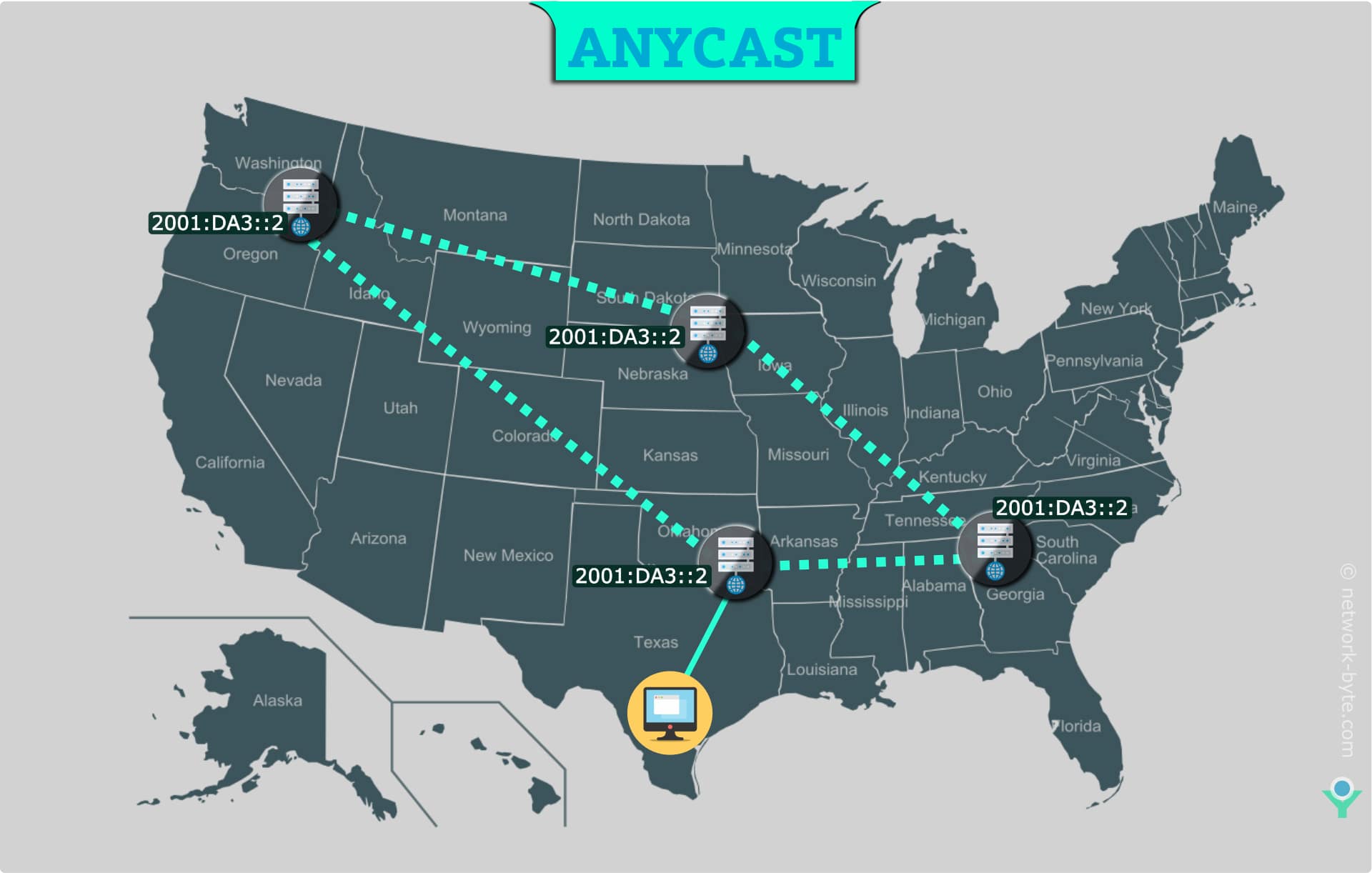 I’m browsing   Youtube/Facebook or Google or some other large platform it has probably a bunch of data centers all around the world. Here in the above fig suppose we have four servers at a different location but having the same ipv6 address i.e. 2001:DA::2

More than one computer can’t have the same IP address and for the most part that’s true in this kind of scenario we’re actually assigning the same ipv6 address to these different systems and we’re basically trying to find what the nearest instance of that is.