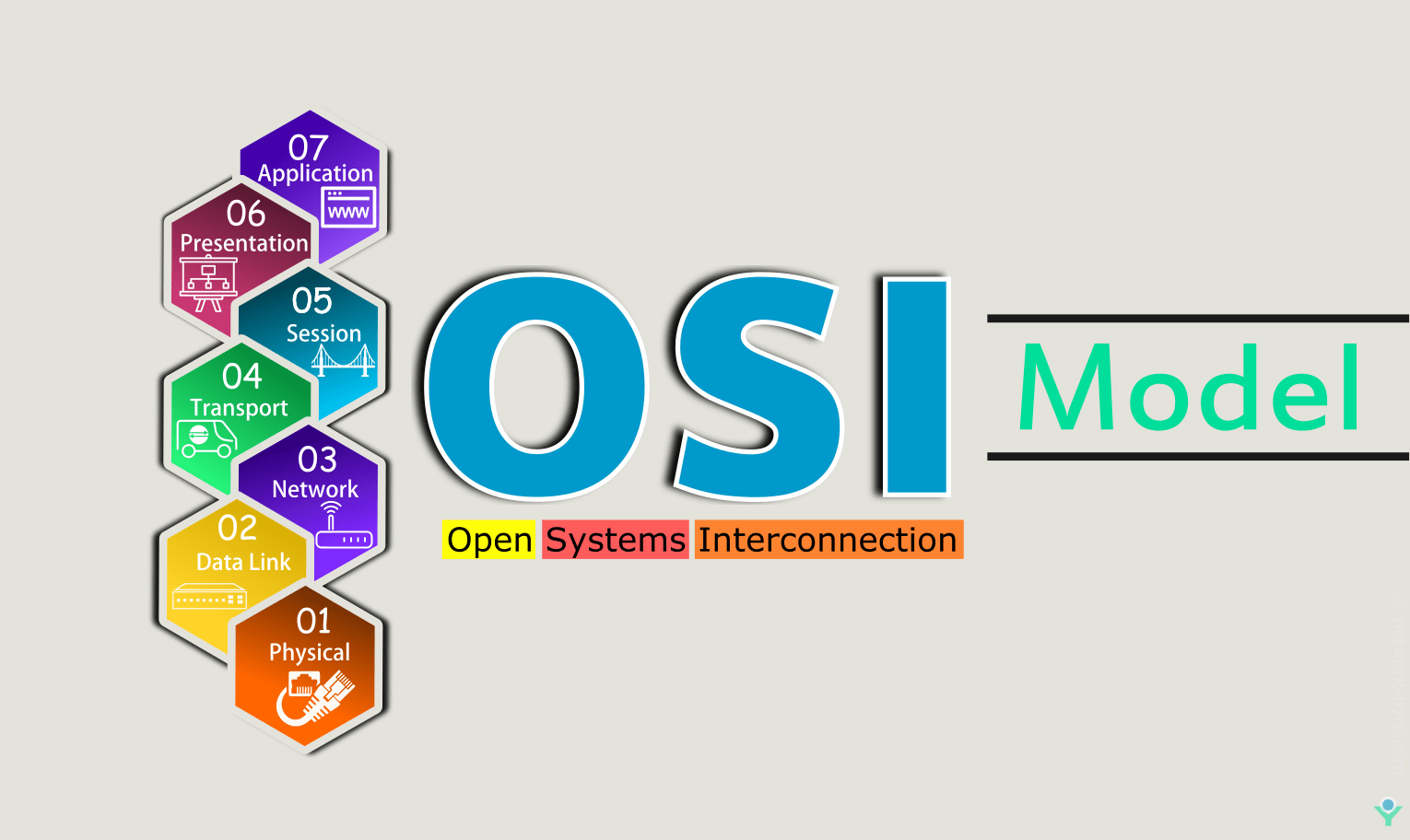 Open Systems Interconnection abbreviated as OSI. It has been developed by ISO – “International Organization of Standardization”, in the year 1984. The OSI Reference Model is based on a proposal developed by the International Standards Organization (ISO).The model is called ISO OSI(Open Systems Interconnection) Reference Model because it deals with connecting open systems for communication with other system. It provides a set of general guidelines for data communications systems and also gives a standard way to describe the interaction between the various layers of data communication systems. This model is the best known and the most commonly used to describe networking environments.

The OSI model is an architecture which divides network communication into seven layers. Each layer covers different network activities, Equipment, or protocols and has its own functions. A new layer is created when different functions are introduced. Each Layer should have its own protocols defined.

The Purpose of the OSI Model

The 7 Layers of the OSI Model

The Open System Interconnect (OSI) model is a Layered approach to networking. It has Seven layers as illustrates in the below image. All these 7 layers work collaboratively to transmit the data from one person to another across the globe. 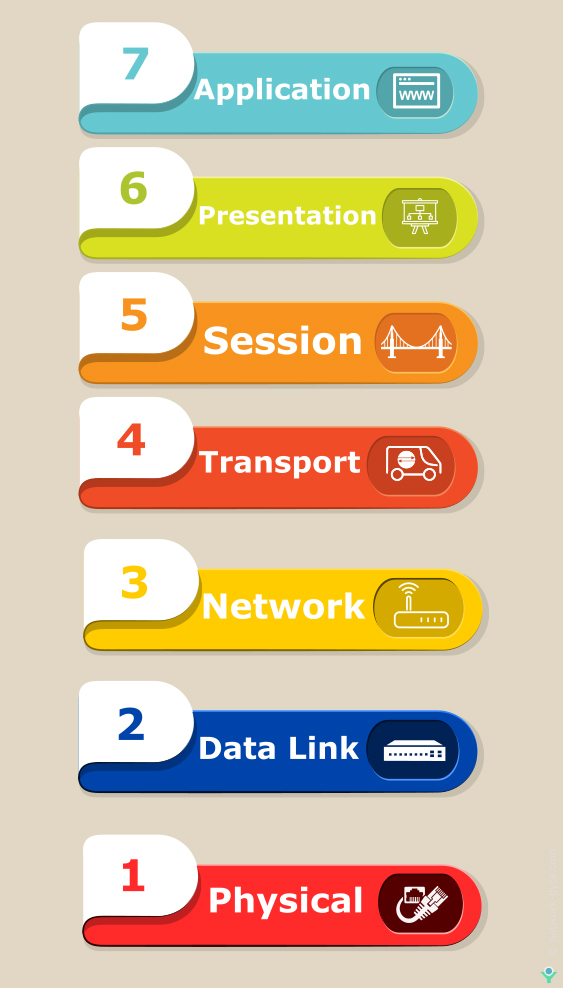 An easy way to memorize the Seven Layers

Here are a few sentences to help remember them in order. The beginning letter of each word corresponds to a layer of the OSI model.

From Application to Physical (top-down):

From Physical to Application (bottom-up):

The seven layers of the OSI model can be defined as follows, from top to bottom

The application layer interacts with the application software and represents the service that supports user application and establishes a user interface to the network services. This layer is usually made available by using an Application Programmer Interface (API) Like Browsers, Messenger-skype, Office 365, etc.

The presentation layer is primarily responsible for preparing data so that it can be used by the application layer. It gives the standard format for transmitting information across various. systems, so, that the data can be understood regardless of the type of systems involved.

It can be viewed as the translator for the network that why it is sometimes is also called the Translation layer. It is responsible for protocol conversion, character conversion, also handles the data encryption and compression and expanding graphics commands.

Major functions of the Presentation layer are:

The session layer enables applications running at two workstations to direct their communications into a single session. The request and responses between the application are synchronized with the help of protocol that is added in this layer.

Important function of the Session Layer:

Transport Layer is responsible for end-to-end communication between the two devices. This includes taking data from the upper layer i.e session layer and breaking it up into chunks called segments before sending it to the Network layer. The transport layer on the receiving device is responsible for integrating the segments into data so the upper layer i.e session layer can consume.

The transport layer ensures that the messages are delivered error-free, in sequence, and with no losses or duplications. The transport layer decides the types of service to be provided to the session layer and establishes connections across the network. Some of the protocols in this layer perform error recovery and control, ensuring that data transferred over the network is received properly.

The four-step in connection-oriented communication are as follows

Functions of the Transport layer

The transport layer has the capacity to accept relatively large messages, but there are strict message size limits forced by the network layer. Consequently, the transport layer must break up the messages into segment units, or frames. Therefore, this layer has a simple method of controlling the excessive amount of data to the other end of the station known as flow control.

Flow control is a method of controlling the rate at which the device sends data. Depending on the particular protocol, the sending and receiving device participate in this process of flow control. The flow control has three standard flavors. They are:

Buffering is used in flow control. The input buffer usually can hold enough data packet, but sometimes the data flow at a faster rate than the receiving device can process it. Therefore, buffer overflows and data will be lost. The flow control process helps to prevent buffer overflow by signaling the sending device to stop the transmission allowing the receiving device to empty its buffer before continuing to send the data.

This is a signaling technique used by data transmission systems in order to indicate the status of the network congestion. Devices that are communicating data across a network rely on congestion notification to decide when to send or delay the transmission of data packets

Windowing is a technique used to deliver the data packets to the recipient in the same order in which they were transmitted to have a consistent, connection-oriented data transfer. The protocol tends to fail if any data packets are lost, damaged, duplicated, or received in a different order. Therefore, a recipient acknowledge is necessary for the receipt before the next packet of data is sent.

The data in the transport layer is referred to as Segments

2.Path through which the data has to be sent to reach the destination

The function of Network Layer

Network Layer is also responsible for logical addressing. It is also known as network addressing or Layer 3 addressing in the OSI model. Example: Internet Protocol (IP) addressing like 192.168.3.5. Logical addressing is very essential for every device in a network. The devices that operate on this layer are Layer 3 Switches and routers.

The network layer also includes error detection and recovery. Special protocols are used at the network layer to allow devices that are logically connected and which also allow exchanging information about the status of hosts on the network or the devices.

Bridges and switches operate at this layer.

The Data Link Layer is mainly divided into two sub-layers:

The Logical link layer manages the communication between devices over a single link of a network and enables multiple higher-layer protocols to shares a single physical data link- Multiplexing.

1. Arbitration
Arbitration is the method to access a single data channel when multiple hosts are using simultaneously. In this method, only one device can send the electrical signal at a time. Any two-device attempts to access the medium at the same time, then the signals from each device will interface causing a collision.

3. Error detection
The data link layer determines the error problems which occur during the transmission data. Introducing a trailer called FCS, which detects the error before it sends the data packets to the remote machine, It does FCS(Frame Check Sequence)uses a Cyclic Redundancy Check (CRC) is often used to allow the station receiving data to detect if it was received correctly.

The data link layer of both the machines must be using the same frame types so that the data packets will recognize the actual data contents.

The Physical Layer is the lowest layer of the OSI model and is concerned with the transmission and reception of the unstructured raw bit stream over a physical medium. It describes the Electrical/Optical, Mechanical, and functional interface to the physical medium, and carries the signals for all of the higher layers. It also provides the electromechanical interface through which data moves among devices on the network.

The Physical layer is the most basic network layer, providing only the means of transmitting raw bits.

Some of the functions of the physical layer involve.

Communication in an OSI Reference Model

The OSI reference model shows the communication between layers and the data transmission between the two systems. It is divided into upper three layers and lower four layers. The upper three layers of the OSI model deal with the application issues which require access to a resource on the network and usually are implemented only in software. The Lower four layers Provide the basic communication between any two systems in the network. The application layer is the highest layer, closest to the end-user. The lower layers of the OSI model mainly deals with data transport issues. 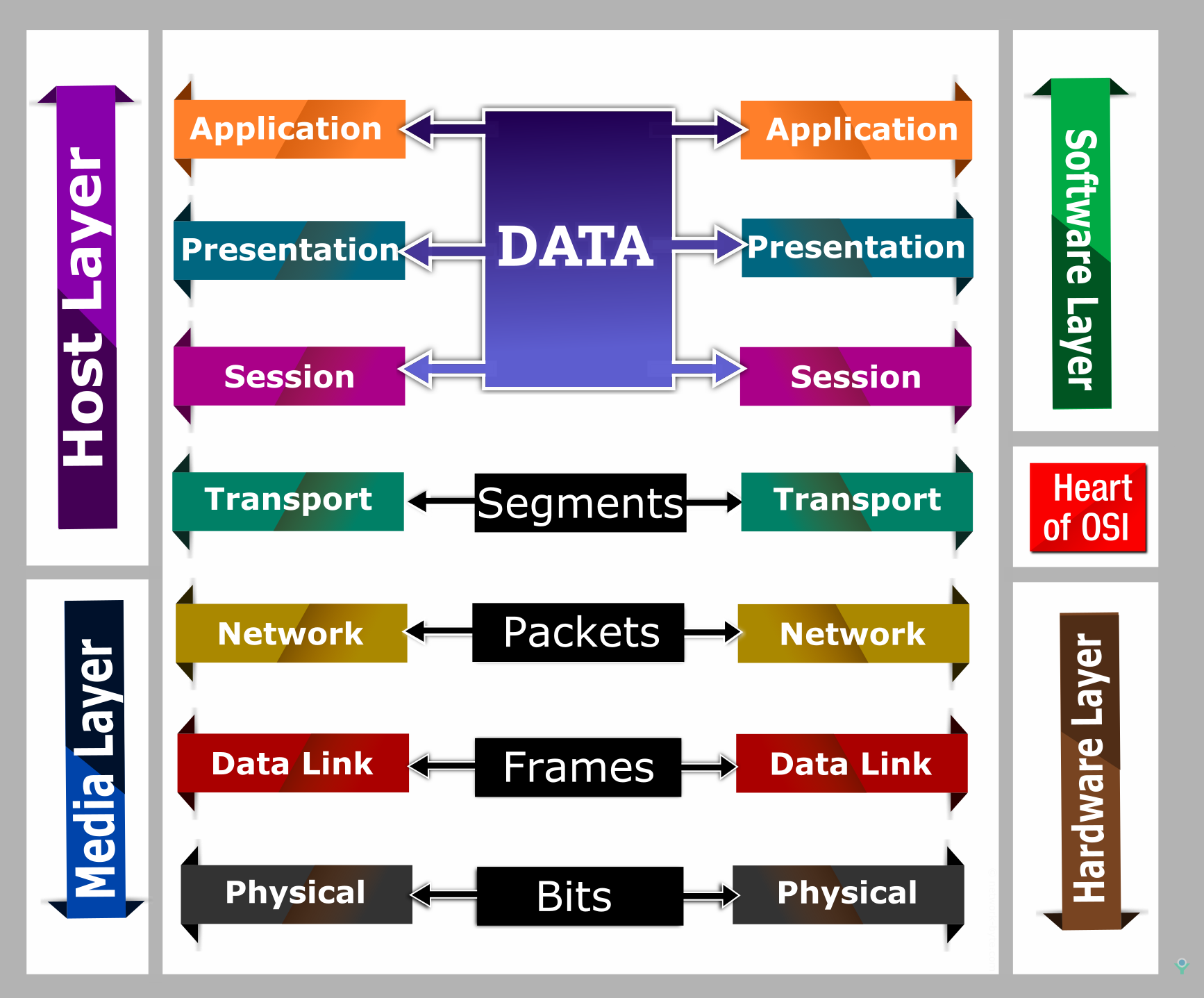 OSI model is used as a reference not implemented on the Internet, TCP/IP is the standard of networking.