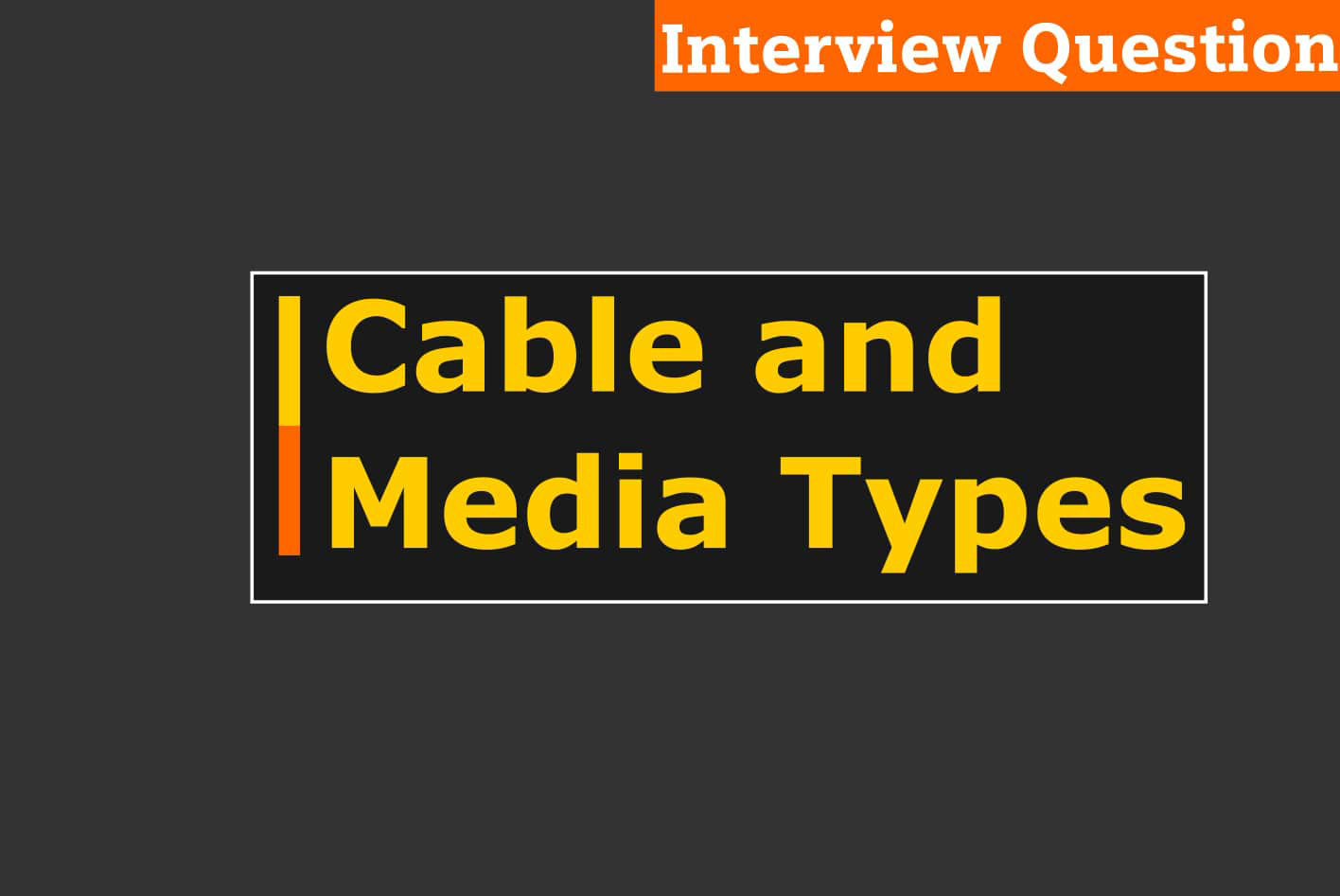 Media Connector Network Cable are various types base on requirement we use them in our networking. It may be fiber cable or twisted pair etc. The connector is also important while selecting cable that can be crimped on cable.

Here we bring Interview questions on Cable and media Types which commonly asked in most interviews. If In your mind you think that question should also be included in this

Cable and media Types interview questions. Put that question in the comment section we will verify and include so,

Every Jobseeker will be benefited from these questions.

Q.1 What Is Ethernet?

Ans. Ethernet is a way of connecting computers together in a local area network or LAN. Ethernet defines how to use the two wires inside a single twisted pair of wires, To send data, the two devices follow some rules called an encoding scheme.

The term Ethernet link refers to any physical cable between two Ethernet nodes.

Ans. Maximum Transmission Unit (MTU) is the maximum number of bytes that can be transmitted in a single transmission unit. Every communication medium has an MTU. For Ethernet, the MTU of a frame is 1500.

Q.3 What do you understand by Fast Ethernet, Gigabit Ethernet?

Ans. It is data speed where 100Mbps is Known as Fast Ethernet and 1Gbps speed known as Gigabit Ethernet.

Q.4 What is Structured Cabling?

Ans. It is a complete system of cabling in building or campus cabling infrastructure connected with network equipment.

Q.5 What is the maximum length of CAT5e cable?

Q.7 where do we use to cross over cable?

Ans. It is used to connect Similar device like MDI and MDI, or MDIX and MDIX

Q.8 What type of cable used between a Router and a Computer?

Q.9 If you have to connect two buildings of distance 200m in a campus which cable we use?

Ans. As distance is greater than 100m we use Fiber Cable and generally multimode fiber used.

Q.10 What are the differences between STP and UTP cable?

Q.11 Which standards are used for Gigabit Ethernet?

Q.12 Can we Connect Singlemode and multimode fiber ?

Ans. Multimode has a 50 or 62.5 micron core diameter, while single mode fiber typically has a 9 micron core. If we connect two fibers with different core diameters, we’ll lose a lot of the light going through the connector.

Q.15 what is transceiver explain?

Ans. A device that can both transmit and receive a combination of transmitter/receiver in a single package for communications. example of transceiver used in networking are SFP,SFP+,QSFP.

Q.16 What is breakout cable and Breakout Patch Panel?

Q.18 I went to the market to buy STP Cable. The shopkeeper showed me cable having label SF/FTP what does it means?

Ans. In this cable, it has both an overall braid shield and foil shield, with individually screened twisted pairs.

Q.20 Fiber Patch cable of Jacket Color Aqua having two connectors on both ends of Green Color. What conclusion did you get?

Ans. It is OM3 Laser Optimized Multimode Fiber (LOMMF) of duplex type and the two end connectors may be of LC with Angle Polished Connector (APC).

Q21 What is the bending radius of fiber optic cable?

Ans. The normal bend radius is the minimum bend radius general rule that it be no less than 15 times the cable diameter.

Q23 What do you understand by GPON and EPON technology in FTTx?

Ans. GPON(Gigabit)or EPON(Ethernet) Passive Optical Network(PON) system utilizes a passive splitter that takes one input and splits it to “broadcast” signals downstream to many users. In Upstream, the passive splitter acts as a combiner to connect all users that reduce the cost passive splitter doesn’t require power and FTTX) (Fiber to the X) X can be the destination of the fiber-optic line for home H is used FTTH, for Building(FTTB), For Premises(FTTP), for Crub (FTTC).

Q24 What do you understand by term OLTS/LSPM?

Ans. It is a fiber tracer called a visual fault locator (VFL). It uses a visible laser that is the red laser light for continuity checking or to trace fibers for several kilometers, identify splices in splice trays, and show breaks in fibers or high loss connectors.

It’s most important use is finding faults in short cables or near the connector where OTDRs cannot find them.

Q26.Where do we use Rollover Cable?

Ans. It is also known as console cable used to connect in Cisco routers/Switches to view terminal screen locally. It having one side with RJ45 connector and other ends with DB9 connector or USB.