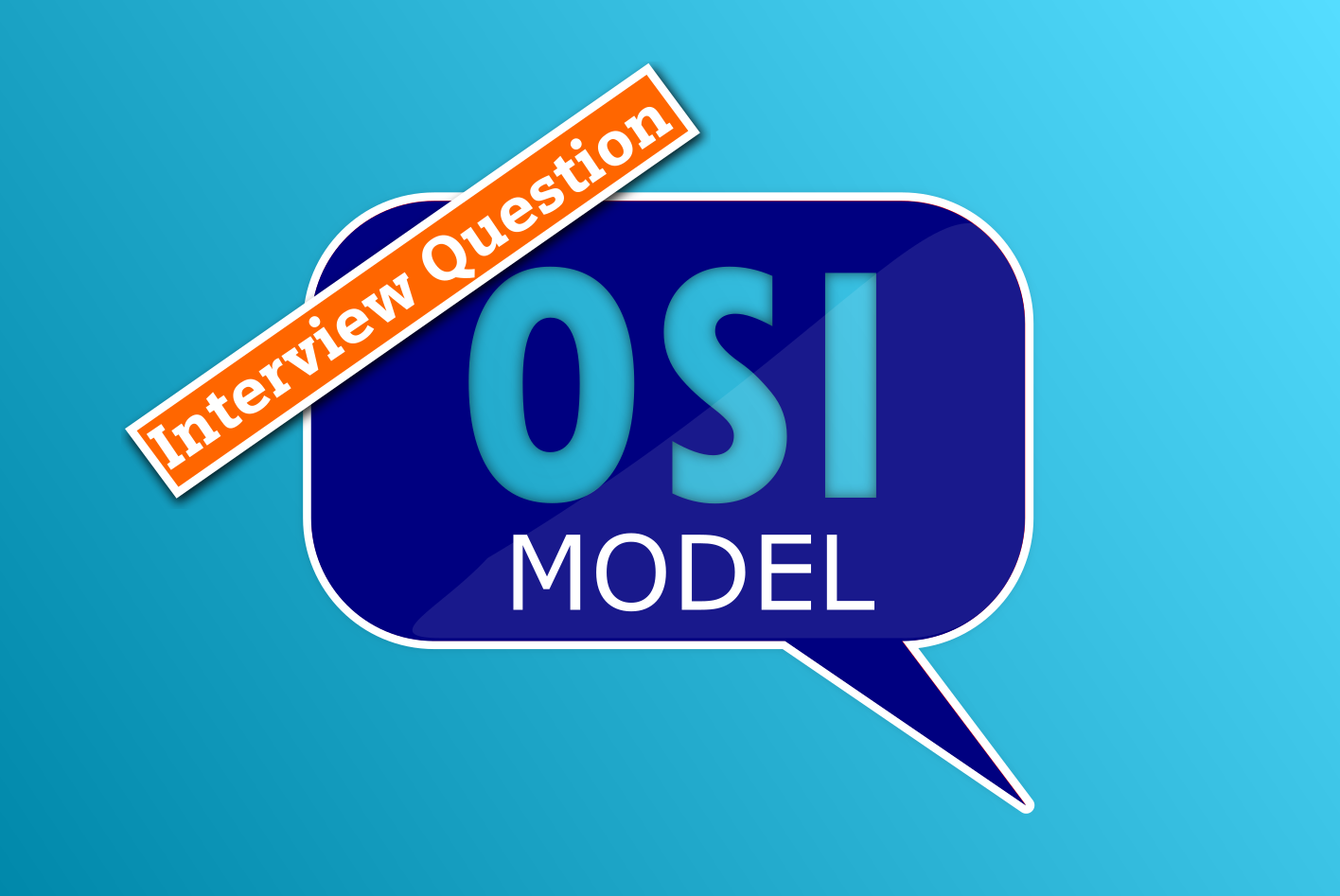 OSI is popularly known as open system interconnection. Here we bring Interview questions on OSI Model which commonly asked in most interviews. If In your mind you think that question should also be included in this OSI Model interview question. Put that question in the comment section we will verify and include so, Every Jobseeker will be benefited from these questions.

Que: Are there any alternate models to the OSI model?

Ans: TCP/IP is the alternate model which defines the flow of data in the network

Que: What are the responsibilities of the Data Link Layer?

Que: What are the responsibilities of the Network Layer?

Ans: Routing, IP Addressing, and Path determination are the main responsibilities of the Network Layer.

Que: What are the responsibilities of the Transport Layer?

Ans: Transport Layer has a lot of functions. These are

Que: What is the difference between TCP and UDP?

Ans: Layer 2 and Some Switches can operate at Layer 3

Que: What is Data Encapsulation?

Ans: Data encapsulation is the process where extra control information is added to the data before being passed to the layer below.

A Protocol data unit (PDU) is an OSI term given to the chunks of information either added (encapsulation) or removed (decapsulation) by an OSI layer.

Ans: Window is the amount of segments sent by TCP between two acknowledgements.

Que: What is the function of the Application Layer in networking?

Ans: Application Layer is responsible for providing a user interface in between user and Network with the help of applications like web browsers.

Que: What are the differences between MAC Sublayer and LLC sublayer in DataLink Layer?

Que: Which service use both TCP and UDP ?

Que: In which layer term “Frames” is used ?

Que: In which layer term “Packets” is used ?

Que: In which layer term “Segments” is used ?

Que: Give some example for protocols work at Application layer ?

Que: What is CRC? Which layer CRC works ?

Que: What is the purpose of the Data Link?

Que: Which one is reliable – TCP or UDP ?

Que: What is the port number of ftp(data) and ftp control?

Que: Which layer provides logical addressing that routers will use for path determination ?

Que: Which layer specifies voltage, wire speed, and pin out cables and moves bits between devices ?

Que: Which layer is responsible for keeping the data from different applications separate on the network ?

Que: Which layer segments and resembles data into a data stream ?

Que: Which layer provides the physical transmission of the data and handles error notification, network topology, and flow control ?

Que: Which Layer manages device addressing, tracks the location of devices on the network, and determine the best way to move data ?

Que: How Data breaks down on each layer from top to bottom ?

Ans: Data remain data in first three layer from top, it break into segment in Transport Layer.Packet in network Layer,In Data-link layer it break into frame and converted into bits in physical layer where transmission occur.

Que: Which layer is responsible for converting data packets from the Data Link layer into electrical signals ?

Que: At which layer is routing implemented, enabling connections and path selection between two end systems?

Que: Which layer defines how data is formatted, presented, encoded,and converted for use on the network ?

Que: Which layer is responsible for creating, managing and terminating sessions between applications ?

Que: DNS uses which protocol? Why?

Que: Which layer is closer to the user?

Que: Differentiate between forward lookup and reverse lookup in DNS?

Que: What is IPSec?

Que: What is the way to establish a TCP connection?

Que: What is the difference between flow control and error control?

Ans: Error Controls the process of detecting and correcting both the bit and packet level error. While flow control is a mechanism to ensure the efficient delivery of Data. Flow control is agreeing on the minimum amount of data that a receiver can handle at a time.

Que: What is difference between Data Encapsulation and data de-encapsulation?

Ans: When data is transfer from the higher layer to the lower layer. Each layer adds its header to the original packet. This is known as Data Encapsulation.

When data is transferred from the lower layer to the higher layer, each layer removes the information added by the other layers. It will remove the headers added by other layers .This is known as Data de-encapsulation.